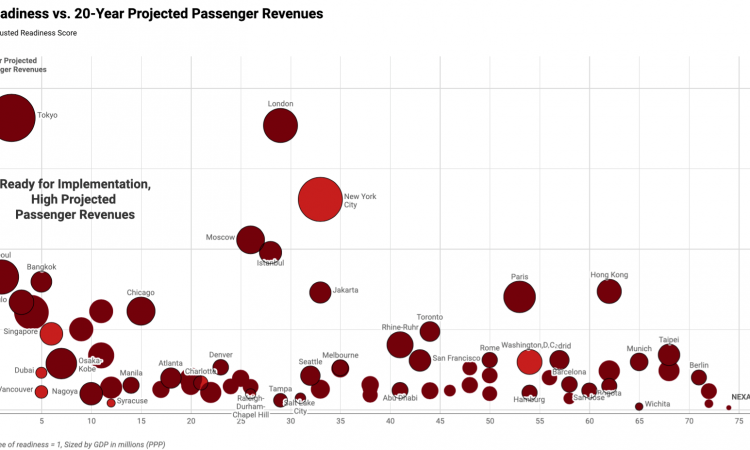 NEXA has researched detailed infrastructure requirements for 74 cities around the world which are most likely to pioneer urban air mobility operations. The upfront infrastructure investments for UAM heliports, vertiports, mega‐ports and airport landing sites – including passenger services, security and UAS traffic management services – will require more than USD30 billion in capital between today and 2040 but will generate direct income of around USD 318 billion, say the report authors, and total direct and indirect income of around USD600 billion.

The team estimates that there will be approximately 1.29 billion passengers flying the analyzed services in the 74 cities within the 20 year forecast period. There will be an initial foundation service period followed by an “Inflection Point” when the market starts to accelerate steeply brought about by increasing use of automation.

“Operator revenues brought about from substantial passenger demand of about 1.3 billion passenger flights yield USD244 billion across all 74cities,” says the report. This represents a 20 year average ticket price of USD188 per passenger. “A capital investment along with operating costs for UAM and AUTM infrastructure is estimated to be about USD31.9 billion. eVTOL vehicle sales should surpass USD41 billion, representing many tens of thousands of vehicles.”

automation of eVTOL flight, dynamic airspace access through geofencing, UATM oversight, sense‐and‐avoid surveillance and vehicle interoperability,” continues the study. “It is not difficult to visualize that cockpit automation will be necessary to improve the safety of flight, and drive costs – and ticket prices – down. The Inflection Point for the industry will occur in multiple phases toward the end of the first decade….However, the ability of vehicle manufacturers to demonstrate and certify safe automated flight to greater than [10‐9] is a critical milestone, and as this will require logging hundreds of thousands of demonstration flight hours, starts now (and it has already begun).”

The study includes a detailed city-by-city infrastructure planning analysis using satellite imagery and the ArcGIS geographic information system produced and maintained by ESRI. For each city infrastructure costs have been analysed and forecast, as well as potential passenger numbers (see below). NEXA has detailed the costs of developing and implementing ground infrastructure and UTM services in the individual cities.

According to the report: “The cost of implementing UATM systems will be borne by the private sector, likely as a “System as a service” model, staffed by scientific and technical personnel along with trained air traffic controllers supervising increasingly automated systems. Some cities will require UATM at a level of complexity requiring tens of millions in up‐front capital investment. The UATM Supply Chain will provide the capability to build out such services. Every major city will have its own unique airspace needs. The urban airspace must accommodate the needs of all these stakeholders. The planning and standards‐setting decisions made in the next several years will determine how UAM and UAS will be implemented in different cities and countries. While UATM infrastructure will not be costly, it is not expected that such budgets will be uniformly picked up by ANSPs, airports, federal or state governments or, by extension, taxpayers. What is most likely and expected is that UATM will be established as a service whose capital and operating budgets will need to be paid for by users. Infrastructure investors can fund deployment.”

“Standards will reduce the cost of manufacturing vehicles and accelerate deployment of UATM. Our analysis points to a 3 to 5 year period for such standards to emerge and become generally accepted.”

Unmanned Airspace assisted in the compilation of this report