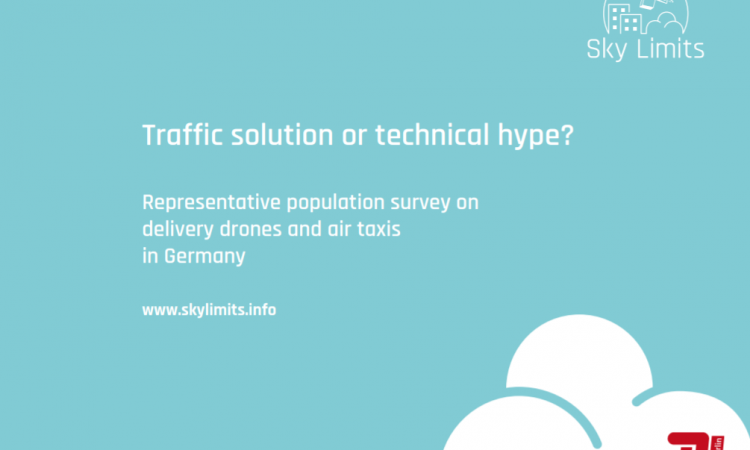 The “Sky Limits” research jointly lead by the Technical University Berlin and Wissenschaft im Dialog gGmbH was undertaken to provide the basis for understanding public perceptions and for future policymaking.

“The results show that most Germans oppose the use of delivery drones (55%) and air taxis (62%) implying a clear rejection of current proposals to develop urban airspaces for transport purposes,” according to the report results. “Medical emergencies, however, are widely accepted: Almost two-thirds of the respondents would agree to the deployment of drones for exclusive medical use. For most respondents, safety and environmental friendliness are core issues in the evaluation of unmanned aircraft. 75% of respondents “rather” or “completely” fear that delivery drones could lead to accidents causing injuries to people- and 81% in case of air taxis. Respondents overwhelmingly rated the environmental friendliness of delivery drones (79%) and air taxis (83%) as important.

“Moreover, two-thirds of respondents doubt that UAV technology would be of benefit for the delivery of parcels and for passenger transport. 21% of respondents stated that they might be willing to personally use drone deliveries, 18% would use air taxis for their individual mobility. The main concern for most respondents were the noise and stress caused by delivery drones and air taxis, on the one hand, and potential job losses in the service sector, on the other hand. Overall, it appears as though respondents rated potential disadvantages of delivery drones and air taxis as more important than their advantages.

“Furthermore, the study finds that gender and age are significant factors in determining whether respondents would use delivery drones and air taxis: On average, women are more sceptical about transport drones than men. Respondents in the age group between 30 and 39 years would use air taxis for their personal mobility three times more often than respondents who are older than 60 years.”