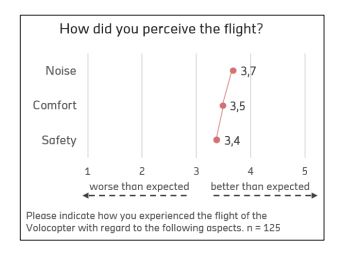 According to research by Hochschule für Technik Stuttgart – a University of Applied Science – 67% of a population sample would probably or very probably consider using of Volocopter air taxi services.

“This is a remarkably high result.,” said the study. “At the same time, we asked participants if they believe that air taxis will become a part of their daily life. This question provides a somewhat less clear picture, with only 45% of the respondents agreeing. Generally, we found that a higher level of knowledge and information about air taxis significantly increases the willingness to use them. This can be seen as an opportunity to further increase knowledge in the population and thus creating even higher acceptance rates.”

“In particular, the Enjoyment of Usage and Time Savings emerged as the main factors. Especially for the younger generation, Enjoyment of Usage was by far the most important factor. On the other hand, statements concerning the safety of the Volocopter receive neither clear approval nor rejection. When comparing the different levels of knowledge to air taxis, it is noticeable that a lower level of knowledge can be an indicator of greater safety concerns. Regarding the question of the estimated price for one person on the route described above (autonomous one way distance about 10km from Stuttgart airport to Stuttgart city center), there is a large range of prices quoted. This is testament to the novelty of the service. Based on a shortened Price-Sensitivity-Meter (PSM) method, we asked the participants to name an expensive price and a cheap price for this route. By combining the cumulated values for “expensive” and “cheap” in one diagram, an optimal price corridor between approximately 60 and 100 Euro can be derived.”

“To better understand the societal acceptance of air taxis, we further evaluated how potential air taxi services would affect the cities landscape and shape its public image. In sum, the results show that from the participant’s perspective, the introduction of Volocopter in Stuttgart would improve most of the covered aspects.”

“A special feature of the study design is that visitors of the event could experience the first live demo flight of the Volocopter in an urban European area. A subset of the participants (n = 126) was interviewed before and after the flight as part of a repeated measurement design. By comparing the response behavior, it becomes clear that the experience of seeing the flight has not changed the generally high evaluation of this new transport technology. The results further show that the expectations of most respondents were exceeded, in particular, the noise level of the Volocopter is perceived as quieter than expected.”

“In sum, this study shows that there is a generally high level of both, individual acceptance and societal acceptance of air taxis in the public. Both topics are highly correlated, which means that a higher willingness to use air taxis results in higher acceptance of air taxi Services and vice versa. Generally, persons with more prior knowledge have a higher intention to use and at the same time fewer concerns regarding safety. Thus, by making the technology better known to the population, even higher levels of acceptance can be expected. The findings further suggest that the individual decision to use an air taxi is based on emotional factors, such as expected enjoyment of usage, as well as rational reasons, such as time savings.”