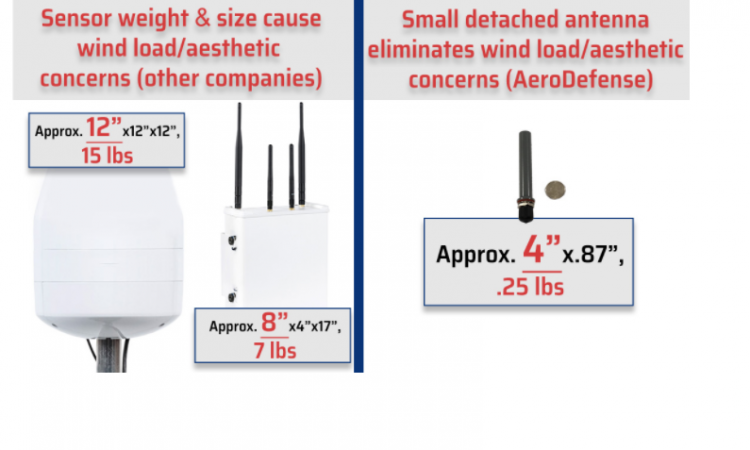 AeroDefense has announced a new “Smart Drone Detection” deployment option for the company’s AirWarden™ system. AirWarden’s existing four-inch, four-ounce detection antenna can now connect back to sensor electronics in a central location or data centre over a fibre connection up to 20 kilometers away. Given its small size and weight, the antenna offers multiple mounting options to complement AirWarden’s Smart Drone Detection deployment model.

“Smart cities can deploy fiber connected permanent antennas in critical areas and equip mobile command vehicles and marine vessels with the same small antenna and easily portable sensor electronics. Individual property owners can deploy on ethernet or fiber or wireless. At a smart airport, antennas can be deployed along runways and around airport perimeters.”

The company says AirWarden has been deployed in the congested RF environment of MetLife Stadium since 2018 and was recently successfully tested in New York City’s Times Square. Earlier this year, the National Institute of Aerospace selected AeroDefense for their inaugural Smart Airport and Aviation Partnership flightPlan Accelerator program.

Linda Ziemba, Founder and CEO of AeroDefense, said, “Our ability to deploy over fiber connections is completely unique to the counter-UAS market and optimal for smart airports and cities and large areas in general. We are eager to help protect these critical sites where drone detection has either been unsuccessful or impossible.”