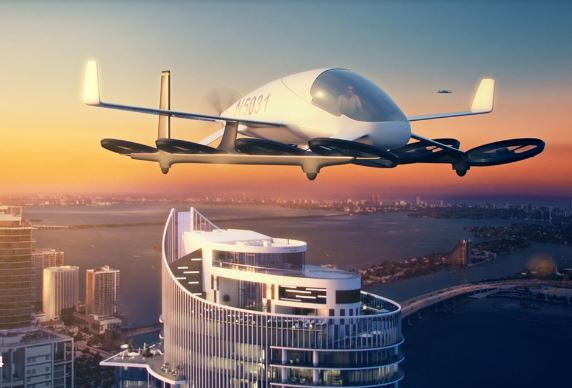 “The Paramount’s flying-car port is the brainchild of its developer, Dan Kodsi. He first revealed the port plan last year. Since then, Kodsi says a Jetsons-like future has only become closer to reality. In an email, he singled out Uber, which in May 2018 announced the five manufacturers it will use to test vertical takeoff and landing, or VTOL, vehicles….The top of the Paramount, part of the broader Worldcenter complex will first serve as an observation deck for residents. If and when the flying-car future arrives, the rooftop will be retrofitted with a landing pad., and the observation deck will become a sky lobby for airborne commuters.”

“We have built the 60th floor SkyDeck pool so its floor will rise; transforming itself into a take-off and landing pad,” Kodsi was quoted.“Via a glass-enclosed elevator, passengers will be lifted to Paramount’s SkyLobby from where they will take-off and land at its SkyPort high above downtown Miami.”