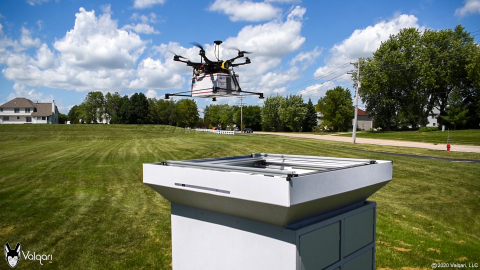 The DDS enables a fully autonomous point-to-point delivery that provides a reliable and secure location for drone deliveries and pickups up to 25 pounds in weight. Also, the Station has the ability to accept packages various ways including winched and hover-dropped, or pickups and deliveries can be carried out via landed drones and other traditional methods. This can also work in reverse by flying from the Station to a moving conveyance vehicle equipped with Tular software.

The seven and a half-feet high DDS can accommodate packages up to 12”x12”x9” and has automated route planning and scheduling features. Plus, deliveries and pickups can be scheduled on Valqari’s app (available for iOS and Android).

Ryan Walsh, CEO and co-founder of Valqari, said, “Our goal is to keep innovating the way in which people and businesses around the world send and receive packages in urban, suburban and rural areas.”

He continued, “Current drone delivery applications often don’t address the last stage of the process. What we have created is a safe and secure delivery Station that protects people, property and packages. Our Station is weatherproof, theft-proof and temperature controlled, which is vital for items like food and pharmaceuticals.”

This technology will debut in pilot trials later this year and recent test footage of the DDS can be viewed here.

Valqari was named a “Top 50 Startup to Watch in 2020” by Built in Chicago and was included on Grind’s “9 Stellar Startups to Keep an Eye On” which recognises up-and-coming businesses.