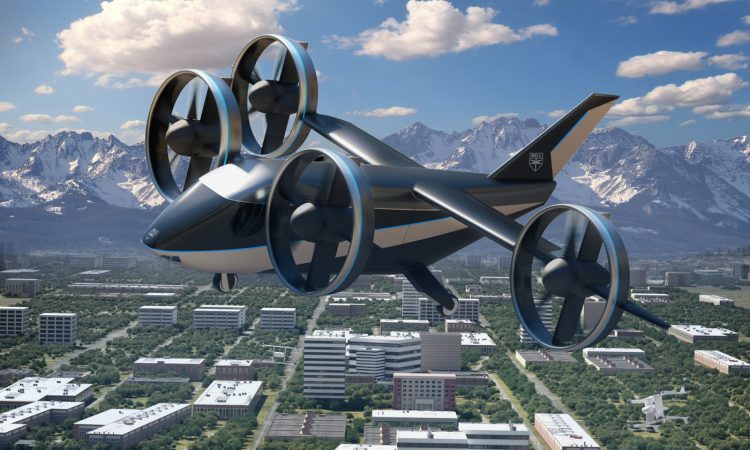 Bell has unveiled a new full-size for the Bell Nexus air taxi at CES 2020.

The aircraft features Bell’s signature powered-lift concept with four tilting ducted fans that can be configured as hybrid-electric or all-electric. Bell believes this design unlocks the key for all-electric technology, but the vehicle will remain propulsion agnostic depending on customer needs.

This year, we’re demonstrating what governing, operating, working and living in a smart city will look like,” said Mitch Snyder, Bell president and CEO.

Bell’s Nexus–the Bell Nexus 4EX (Four for the number of ducted fans, E for Electric and X for experimental) continues to evolve and the manufacturer released renders of a new design.

The UAM has designed to be electric but a hybrid version is possible and the range would more than double.

“The vision for the Bell Nexus remains the same, but by taking a mature system level approach to design for an objective market vehicle, we believe this configuration unlocks a capable, certifiable and commercially viable product,” said Snyder.

Various “smart city” elements were on display in the so-called Bell’s Nexus City on the CES show floor, namely:

Various other “smart city” elements were on display in the so-called Bell’s Nexus City on the CES show floor, including what it is dubbing “Mobility as a Service (MaaS) & Bell AerOS.”

“The transportation industry has reached an inflection point, and many of the world’s top minds are working toward solutions for the optimal smart city design. Bell remains at the forefront of this pursuit with a clear mission of finding solutions to the infrastructure challenges of tomorrow’s transportation networks,” the company announced in a press release.

Bell’s plans “look beyond the aircraft and demonstrate how to integrate MaaS into communities, making on-demand air mobility available to everyone–whenever they need it,” the press release continued.

Bell’s service is powered by Bell AerOS, a proprietary system running on Microsoft Azure created to manage fleet information, observe aircraft health, and manage throughput of goods, products and predictive data and maintenance. This digital infrastructure is prevalent in Bell’s Smart City vision at the show and serves as another step in bringing connected mobility to the masses.

“Bell continues to lead the conversation beyond the aircraft to offer multi-modal transportation solutions and experiences within an interconnected digital network that will excite consumers, earn their trust and make their lives easier,” said Snyder.