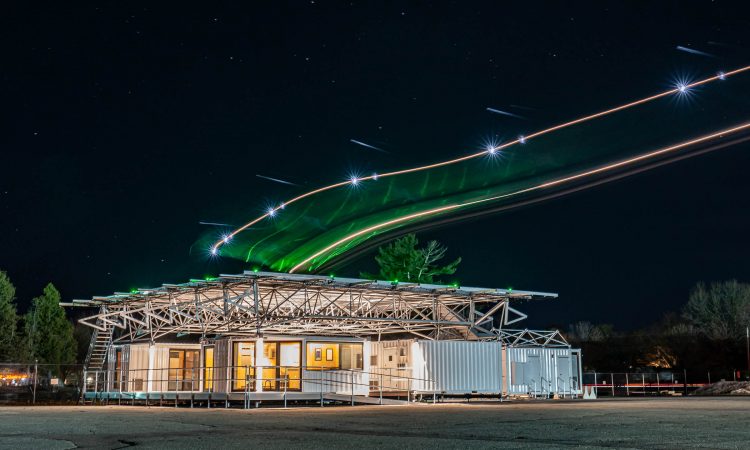 In a corner of ‘Burlington International Airport’ resides a structure with a sleek wood-lined lounge, two cozy bedrooms, and a view from its front porch of Vermont Air National Guard F-35 fighter jets rocketing down the runway. The scene smacks of a villain’s lair writes Eric Adams of ‘Wired Magazine’.

But this strange outpost isn’t an evil genius’s hideaway or even just a primo plane-spotting perch. Burlington-based ‘Beta Technologies’, a three-year-old company that’s developing an electric vertical-lift airplane created this building to be a key component in the future of aviation: A charging station for electric aircraft, from pilotless drones to futuristic flying taxis. “It can charge the aircraft, providing accommodations to ‘recharge’ the flight crews, as well, or it can serve as a handoff point for cargo or medical supplies,” says Kyle Clark, Beta’s founder.

The station is designed for the coming wave of electric air taxis and their demand for fast  charging, a requirement few of the industry’s players have yet to fully explore. Topping off the larger and more powerful batteries used by electric aircraft could cause even greater strains on the grid than electric cars, which already face challenges in gaining steady and reliable power delivery from charging stations.

Beta developed the stations in tandem with work on its two prototype aircraft, first a small tilt-rotor version called Ava followed by a radically different production version called Alia, set to be revealed within a few weeks. Depending on their configuration, the stations could serve as a charging pad for human-piloted or fully autonomous vertical takeoff and landing (eVTOL) aircraft, a landing pad for conventional helicopters, or a way station for cargo deliveries or emergency UAV operations when medical and other supplies are needed during a crisis, such as the current Covid-19 pandemic.

Clark says the stations can be set up in tight urban spaces, where the 20-foot-high landing platform would help ensure safe approaches and departures for all types of rotorcraft, whether full-sized passenger-carrying air taxis or small delivery drones. They’re also suitable for remote, undeveloped areas where they would help extend the range of eVTOL craft. The sleeping quarters and lounges allow crews to rest overnight or simply to kick back while their craft charges. These would be particularly useful if secured and installed at low-volume airports that don’t have hotels or other services nearby.

Technologically, the charging station is an exercise in power management for aircraft charging. “One of the biggest challenges was mitigating the demand that would be created if aircraft were charging directly from the grid,” says Chip Palombini, a Beta engineer, echoing a problem faced frequently at electric car charging stations when the charge rate can be hurt by overall demand.

To solve the problem, the station would be wired to the grid and augmented by large arrays of “second-life” batteries—repurposed from electric cars and other uses—which can be charged either from the grid or with solar panels. Using proprietary power controllers, the stations can deliver juice to the aircraft quickly and efficiently, Clark says. “The system enables ultra-rapid recharge of large electric aircraft without requiring big power lines to serve the load,” he says.

The system’s 250 kW energy storage inverter, 500 kW DC fast charge converter, and 500 kWh battery could charge an aircraft the size of Beta’s forthcoming 6-passenger Alia—which has a 350 kWh battery pack—in about one hour, Palombini says. For comparison, a Tesla with an 85 kWh battery pack can top off at one if its Superchargers in about 75 minutes.

This combination of electric power and solar charging is crucial to Beta’s primary client, ‘United Therapeutics’, which provided the initial funding for Beta. The biotech company is developing manufactured organs for human transplant—something it expects to be available in five years—and founder Martine Rothblatt wants to use Beta’s electric aircraft as an eco-friendly way to transport the organs from the production centre to hospitals. The battery backup also would help ensure readiness should the grid fluctuate or be cut off completely.

Beta’s aircraft, and its new charge pad, will have plenty of other uses. The system could have attractive emergency-use applications during natural disasters—or pandemics—when delivering supplies requires fast, reliable, and secure transport. (Elevating the landing pads and enclosing the structure in fencing would help with security.) Depending on the application or location, the power stations can be built in a variety of configurations, from the size of a refrigerator when charging for only a single aircraft is required, or larger variants with crew quarters and more robust power sources that could land and charge multiple aircraft at once. “It’s scalable with the growth of electric aviation,” Clark notes.

For larger stations, the modular system might include a container with equipment for managing the grid connections and powering snow-melting equipment and lighting controls for the landing deck. Another container might hold batteries or an optional backup generator, and still others could be used for emergency supplies for disasters. The system would also include communications and local weather monitoring equipment to ensure it can operate even if cut off from broader aviation networks.

Clark says the system could be ready to go long before eVTOL aircraft are actually in operation—something targeted for the middle of this decade, assuming progress isn’t hindered by the current economic crisis. In fact, they could be placed in service almost immediately for UAV operations. Until either need arrives, it will simply be the coolest pad in Vermont.