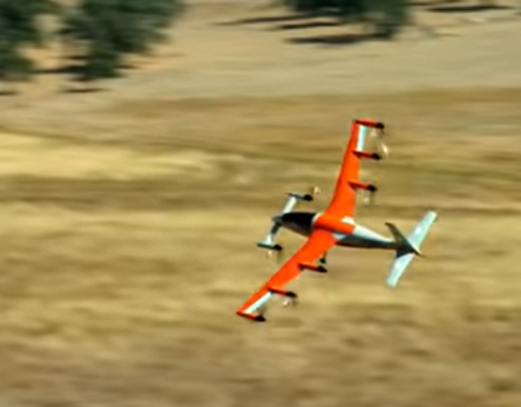 The US National Transportation Safety Board has issued a report into the heavy landing of a Kitty Hawk Corporation Heaviside 2 unmanned aircraft system on October 17, 2017, which severely damaged the aircraft but caused no injuries. The NTSB determined the probable cause(s) of this accident to be “a software timing error initiated by a battery charging script that was not properly terminated prior to the test flight due to operator error.”

According to the report:

“According to the operator/manufacturer, approximately ten minutes into the test flight the aircraft encountered an anomaly while in conventional wing-borne flight at 2000 ft msl (approximately 700 ft agl). The ground station operator notified the Pilot-In-Command (PIC) that multiple flight computer limits were exceeded. The PIC took manual control of the aircraft and began descending the aircraft in preparation for an immediate landing. The PIC stated that he felt the aircraft had degraded control, and because the location on the test site was a large open field that allowed for a land out maneuver in any direction, he made the decision to perform a conventional landing into the wind. Once the aircraft approached the intended landing zone, the PIC slowed the aircraft by transitioning the aircraft towards a hover configuration until he felt there was additional risk to aircraft control if he transitioned further, and the aircraft landed with approximately 37 kts forward airspeed, 20 degrees nose down pitch, and 20 degrees left roll. The aircraft landed in a field of tall grass and suffered substantial damage.

“….A review of the recorded data by the operator/manufacturer revealed that a software timing error occurred which affected the controllability of the aircraft. The software timing error was caused by a battery charging script that, due to operator error, was not properly terminated at the ground station prior to the test flight. The improper termination resulted in the battery charging script running in an error state when it was not intended to be running, and the priority associated with the script allowed for the script to utilize significant processing resources. The manufacturer confirmed both the cause and effects of this timing error by recreating the sequence of events using a hardware in the loop simulator.

“To address the anomaly encountered in this test flight, the manufacturer stated that they are making improvements to ground station and support equipment procedures. They further stated that future software versions will address processor priority issues to prevent similar timing errors from occurring. Finally, following the completion of these corrective actions, the manufacturer stated they intend to have their corrective actions validated by an external party review.”