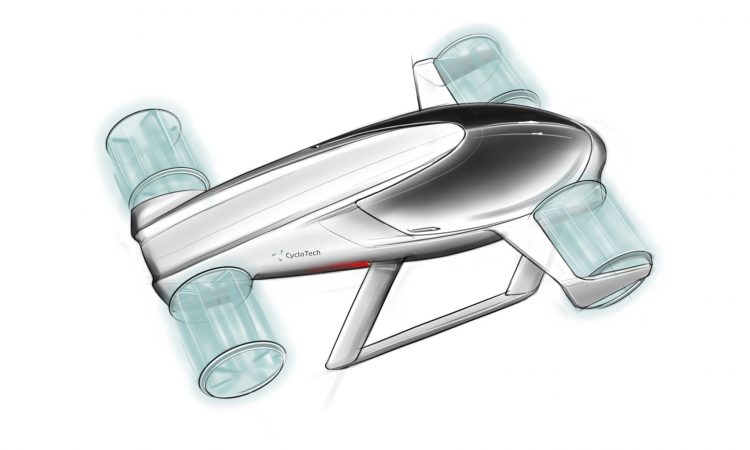 Linz-based CycloTech GmbH has developed an advanced propulsion system for air taxis and drones based on the Voith-Schneider propeller maritime concept.

According to a company statement:

“It combines the advantages of vertical take-off and landing with those of efficient forward flight, without having to rely on airfoils. The propulsion system thus permits a compact design of the aircraft and offers an alternative for air taxis and drones when greater distances are involved. Efficient propulsion technologies for these applications are currently lacking….After more than 15 years of development work, the Cyclogyro rotors are on the verge of undergoing long-term testing in a prototype and thus being brought to final market readiness. By the end of 2020, the company with its 15 employees aims to build and test its own 80 kg flight demonstrator, and thus move on to the next product development stage. According to CycloTech CEO Hans-Georg Kinsky, they are currently working on elevating the development status of the propulsion system to TRL 71. This requires additional investors and strategic cooperation partners, with whom discussions are already underway.”

A Cyclogyro rotor consists of multiple blades which rotate about a central axis and which are connected to a rotatably-mounted hub. A shift of this hub from the rotation centre of the rotor leads to a cyclical movement of the blades. This accelerates the air flow through the rotor and generates thrust. The power and direction of the thrust can be controlled directly by positioning the hub. For a constant speed and rotation direction, the direction and magnitude of the thrust can be changed 360 degrees about the rotation axis within fractions of a second. Each propulsion system can also be controlled separately if three or more Cyclogyro rotors are used in aircraft. Vertical take-off and landing and a stable transition to forward flight are thus possible.

The company claims a number of unique selling points:

“We are convinced that our rotor is currently one of the most exciting projects in aviation and has the potential to revolutionize propulsion technologies for vertical take-off and landing (VTOL) applications,” said Hans-Georg Kinsky.