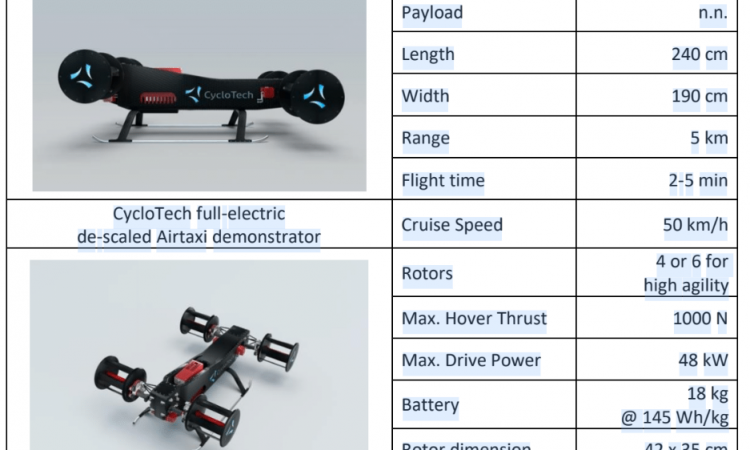 Cyclotech (https://www.urbanairmobilitynews.com/air-taxis/cyclotech-launches-airfoil-less-air-taxi-propulsion-concept/) plans to perform the first perform full system tests on its airfoil-less air taxi propulsion concept on a static test bench and then take-offs and hover flights on a dynamic test bench this November and December.

According to CEO Hans-Georg Kinsky: “By the end of the year the demonstrator should be capable of slow movements through our test hall. Beginning of next year we will start to fasten the forward flight movements and in Q2 we plan first outdoor flight for longer flights and faster forward movement. In the meanwhile we are working on the development of a high maneuverability drone for inspection of critical infrastructure in narrow areas and rough conditions. This will basically be a conventional drone with additional Cyclogyro rotors as auxiliary system to enhance agility and gust compensation in rough conditions for high precision maneuvering in windspeeds >20m/s.

“In parallel we will pursue our ambitions in the Urban Air Mobility Market to seek for cooperation with aircraft manufacturers or developers, especially the ones with lift+cruise concepts, to integrate our rotors as auxiliary system as well.”