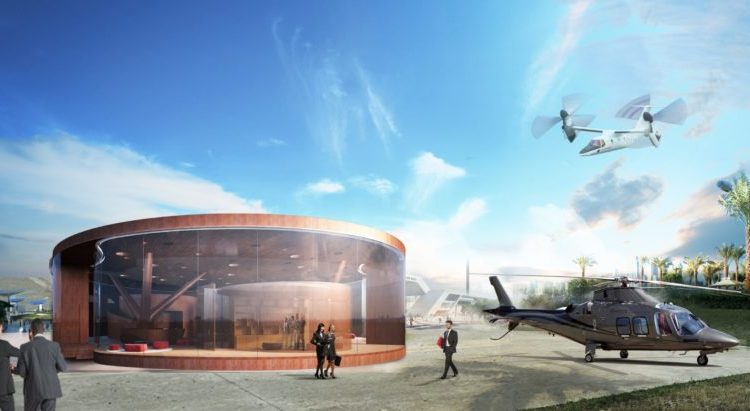 Leonardo and Falcon Aviation Services are set to preview an all-new rotorcraft-dedicated terminal at the Dubai Air Show 2020.

Its aim is to meet the growing demands for sustainable and modern vertical lift mobility as well as greater access to urban areas.

The new rotorcraft terminal combines a helipad, a showroom and lounge areas in a single city-based heliport. The terminal will support the development of a network of point-to-point connections for both urban transfers and connections between cities. VIP and charter services users and passengers will be provided with levels of service typically available only in larger private airport facilities far from downtown and urban areas. The rotorcraft terminal features strong environmentally friendly design and modularity using recyclable materials and, If required, it can be transported.

With approximately 90 per cent of the UAE’s VIP helicopter fleet made of Leonardo products, the company will be showcasing its AW609 tiltrotor beside the terminal, providing a further example of innovative leadership in passenger transportation. The world’s fastest commercial rotorcraft, the AW609 is set to begin a new era in urban connections, with unprecedented benefits for cities in the UAE and the Gulf region, too.

Alessandro Profumo, Leonardo CEO, said: “This one of a kind initiative demonstrates that Leonardo, together with its long-established leading partners, is shaping the way we will fly in the next few decades. We’re proud to have joined forces with Falcon Aviation Services on this project in Dubai which will provide unprecedented levels of quality transportation services during a world class event like Expo 2020.”

Her Highness Sheikha Alyazia Bint Sultan Bin Khalifa Al Nahyan, chairperson of the executive managing committee of Falcon Aviation, said: “We’re very excited to be working with Leonardo on this groundbreaking development in sustainable air mobility in Dubai to provide a never-before-seen level of transport service to millions of visitors during the world’s greatest show.”

Building on Leonardo’s long established expertise and leadership in the VIP-VVIP/executive helicopter transport market, several rotorcraft terminals may be established in other parts of the world, including Europe, North and South America, and South-East Asia, to respond to the regional demands for innovative mobility and greater levels of service.