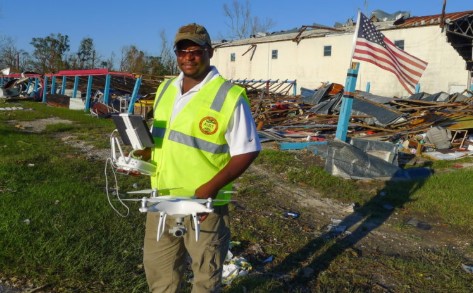 Some disaster drone crews exhibit elevated levels of fatigue equivalent to a blood alcohol content of 0.05 per cent after two days of work, according to research reported in Texas Climate News.

This amount of intoxication would put them above the legal limit for airline and helicopter pilots.

The study was conducted by Ranjana Mehta, associate professor of industrial and systems engineering at Texas A&M University.

“But as unmanned aircraft usage increases, researchers have begun studying what it’s like for the humans operating these machines,” reports the News.

“Mehta and her colleagues observed 23 experienced pilots throughout three disasters: hurricanes Harvey and Michael and the Kilauea volcanic eruption. They gauged pilots’ fatigue using a standard test used by NASA and the U.S. military,” the report says.

The extreme fatigue is not that surprising given the working conditions, Mehta told the publication.

After Harvey, pilots were working outside for 12 hours. The environmental conditions can be taxing.

“After a hurricane, a lot of the time it’s just humid and hot and nasty,” added Robin Murphy, professor of computer science and engineering at Texas A&M, who was involved in the research. She has piloted drones in 29 disasters, including 9/11 and Hurricane Katrina.

Weather is only one challenge, but there are many others. In a flood, pilots may be standing on a small patch of land, swarmed by insects, Murphy said. They may have to work long, irregular hours. At the Kilauea eruption, crews worked 24-hour shifts.

“The problem with pilot fatigue is that it leads to mistakes,” the report says. “In the recent research, pilots made more errors when they were sleep-deprived. And according to prior analyses, about half of robot deployment failures are caused by human errors. In a disaster scenario, mistakes can result in serious consequences, Mehta added. Expensive equipment or critical information could be lost.

A lack of standards is partly to blame for pilots’ high levels of fatigue, Mehta continued. Airline pilots are subject to regulations regarding rest schedules and have checklists to guide them through work procedures. Regulations aren’t as clearly defined for drone pilots, Kathleen Swain, senior director of unmanned aircraft systems programs at the Aircraft Owners and Pilots Association, told Texas Climate News.

The issue of fatigue is well known among the disaster drone community, the report states.

“We’ve all talked about it,” Murphy is quoted as saying, “but no one had any data.”

“She and her colleagues hope to continue collecting information on pilot fatigue. Ultimately, they plan on using their research to inform standards for pilot rest schedules, work procedures and training,” the News concludes.