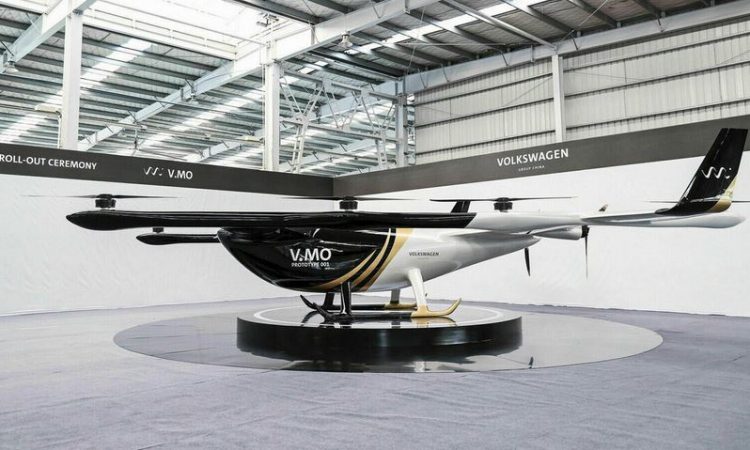 The company reports in a press release “In 2020, Volkswagen Group China launched a Vertical Mobility project to explore the next generation of mobility solutions, including the urban air mobility market and the extension of urban traffic into airspace. The project team has now developed its first validation model – the V.MO – also nicknamed the ‘Flying Tiger’ due to its distinctive black and gold livery, which was painted to commemorate its launch in the Year of the Tiger.”

The press release continues “The prototype concept is based on existing autonomous driving solutions and battery technology for emission-free mobility. With a luxury x-wing configuration of 11.2m in length and a span width of 10.6m, the model features eight rotors for vertical lift and two propellers for horizontal flight.

“The Group will conduct several flight tests later this year to optimize the concept and an improved prototype will undergo further advanced test flights by late summer 2023. In its final future iteration, the fully electric and automated eVTOL could eventually carry four passengers plus luggage over a distance of up to 200km.

“Volkswagen Group China is supported by Chinese partners including Hunan Sunward Technology, a subsidiary of Hunan-based manufacturing group Sunward. The company specializes in aviation product development, sales and services and is a market leader in the light sport aircraft industry.”