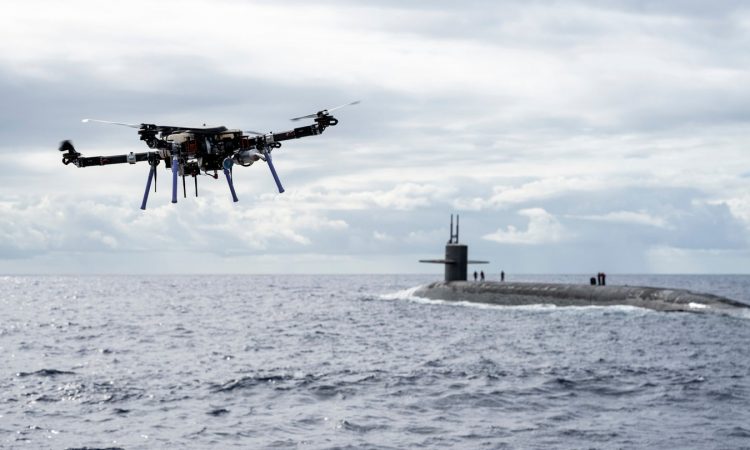 USS Henry M. Jackson had a unique experience last week when a quad-copter drone delivered food and general supplies while the submarine sailed on the surface of the Pacific Ocean near Hawaii, reports thedrive.com. The trial is part of the US Navy’s aim to expand its power at sea by extending ship’s patrols beyond three months. The Navy said this was a test to explore novel concepts for resupplying Ohio class submarines while they’re out on their nuclear deterrent patrols. The “replenishment by drone” trial took place on October 19th, according to the Navy. “This event was designed to test and evaluate the tactics, techniques, and procedures of U.S. Strategic Command’s expeditionary logistics and enhance the overall readiness of our strategic forces,” commented a spokesperson.

While details of the trial are scant, some of the pictures show personnel launching the drone from a small boat sailing relatively close to the submarine. The concept is sound and could have potential, even for just moving small, but critical items, such as medicine, emergency rations, or similarly sized cargoes. A small drone might also carry orders and other important messages, as well as intelligence information and other data on physical media. Certainly, deploying vertical take-off and landing drones with greater range capabilities and payload capacities would expand this concept. Also, this could apply to conducting at-sea replenishment of naval surface vessels or shuttling cargoes between one ship and another. Even so, it is not perfect for submarines when they are vulnerable sailing on the surface. And if the vessel launching the resupply drone has to be located relatively close by, it could further increase the risk of detection.

Yet, One solution to this problem could be a specially-designed drone that can land on the water and then sink below its surface, where a submarine might be able then to recover it. Various such concepts already exist and the secretive and highly specialized guided-missile subvariants of the Ohio class, have demonstrated their ability to launch and recover various kinds of unmanned aerial platforms while submerged. At present, helicopters seem the best way of transporting supplies to submarines and naval vessels out at sea and the day after the drone trial, such a test took place.

This recent visit by a cargo-carrying quadcopter to the Henry M. Jackson appears to have been very much a limited experiment, but it offers another possibility on how the Navy’s at-sea “replenishment concepts of operation” are likely to evolve in the near future.