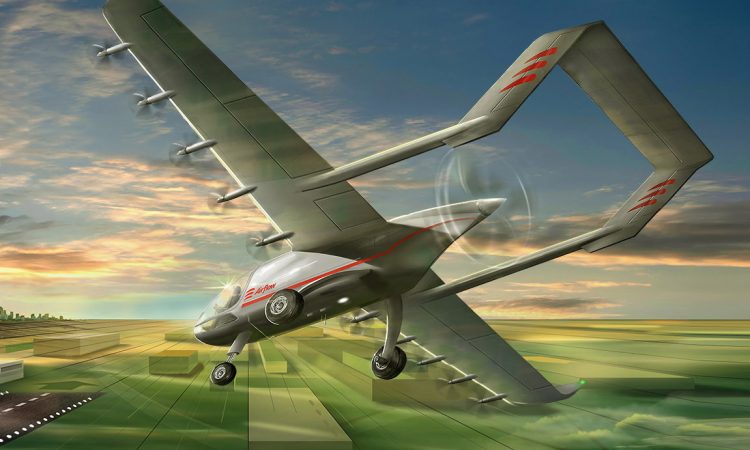 According to Ausman, who lays out the case for eSTOL aircraft in a June 9th blog post, the co-founders’ experience with the Vahana technology demonstrator made them “keenly aware of the challenges and compromises inherent in current eVTOL designs,” driving them to find an alternate way to address the urban air mobility market.

They decided that, for use cases where at least 300 ft of runway is available, eSTOL aircraft offer lower development costs, operating costs, and noise. Because eSTOL aircraft can be certified under existing Part 23 regulations, they also pose less certification risk than eVTOLs, which must be certified using a more complicated and expensive process that is not yet fully defined. Airflow estimates it can develop and certify an eSTOL aircraft for around $200 million, versus more than $700 million for an eVTOL aircraft.

Based in the San Francisco Bay Area, Airflow is initially targeting the middle-mile logistics market with an aircraft that can carry one pilot and 225 kilograms up to 400 kilometres. Airflow says its eSTOL will be able to operate in poor weather and take off and land in just 45 metres, enabling the transfer of time-sensitive cargo directly between warehouses throughout the day and night. The company predicts its airplanes will be four times faster than trucks, with a third of the hourly operating costs of comparable helicopters or eVTOLs.

“The demand for same-day e-commerce continues to rise, and we’re building a new low-cost aerial capability to enable that growth,” Ausman stated in a press release. “Our approach from the beginning is to focus on a simple aircraft design with well-defined new technology.”

Airflow isn’t the only company that has decided that eSTOL aircraft represent a more promising near-term play than eVTOLs. Other eSTOL developers include Pyka, which is already flying its airplanes in crop-dusting operations in New Zealand, and the startup Electra.aero, established by Aurora Flight Sciences founder John Langford.