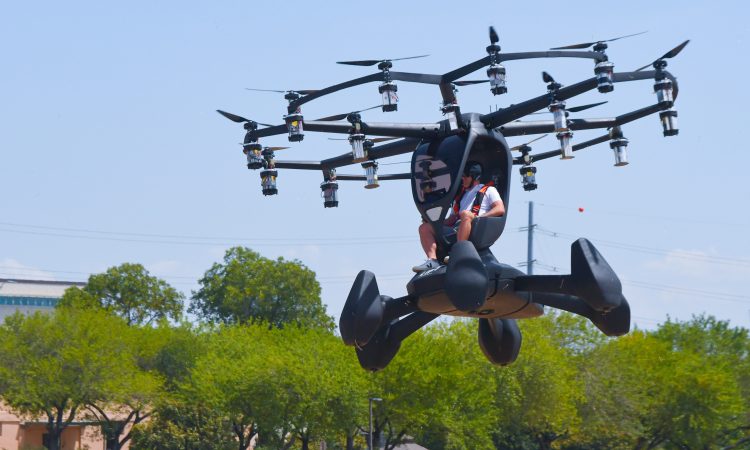 The single-seat Hexa eVTOL Ultralight was piloted by Matt Chasen, founder and CEO at LIFT Aircraft, Inc., a Texas-based Small Business Innovation Research (SBIR) contract recipient and one of the first companies of its size to join the Agility Prime “Air Race to Certification.”

Chasen gave a brief demonstration, on a hot afternoon, that included hovers, turns and forward flights. This demo took place on the parade ground of Camp Mabry in front of Secretary of the Air Force Barbara Barrett, Air Force Chief of Staff Charles Q. Brown, Jr., Chief Master Sgt. JoAnne S. Bass and leadership from the Texas Air National Guard. After the flight, the Air Force leaders were able to inspect the aircraft and sit in the cockpit. Secretary of the Air Force, Barbara Barrett, said back in April, “The thought of a landing vehicle, a flying car, may seem straight out of a Hollywood movie, but by partnering with stakeholders across industries and agencies, we can set up the United States for this aerospace phenomenon.” Adding, “Agility Prime is a program with a vision of world impact.”

Col. Nathan Diller, AFWERX director and Agility Prime lead, said, “We now have over fifteen of the leading aircraft manufacturers in the world applying to partner with Agility Prime, with many of them already on contract.” He continued, “This flight today marks the first of many demonstrations and near-term flight tests designed to reduce the technical risk and prepare for Agility Prime fielding in 2023.”

LIFT’s plans included a 25-city US tour where members of the public, with or without pilot’s licenses, can fly the Hexa after a few hours of training. More than 15,000 people registered to fly the craft. Due to the pandemic this was postponed.