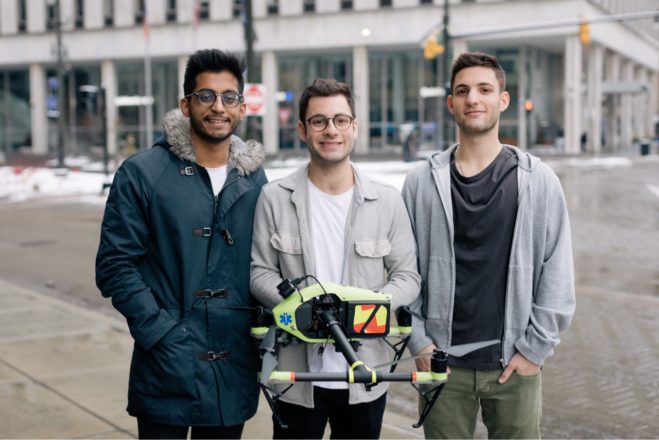 Two brothers have pioneered how anti-overdose drugs such as naloxone are delivered to patients by using a drone, according to the Detroit Jewish News.

“During that time, Matthew and Connor were working with drone technology and experienced an aha! moment: Why not create a drone to deliver medications in high-risk situations?” the paper writes.

“Our drone is not meant to replace first responders, but instead supplement their efforts,” Matthew to the publication. “The problem that we were exposed to was that medication wasn’t reaching the patients fast enough or there wasn’t enough staff to help.”

“The point is that there is this readily accessible treatment that can be given by anyone,” Connor added. “This is about bolstering access and enabling bystanders to help these patients.”

Their drone is designed with a high-intensity headlamp, a first-person view camera, payload delivery system and shockproof container for carrying intranasal naloxone, the News says.

“For first responders, if they have a patient in dangerous areas where there’s not a lot of light or a high prevalence of crime, this could be a tool to survey the area before they head in,” Connor said.“

“Matthew, 25, is in his third year of medical school at Wayne State University. Connor, 22, is in his first year at Icahn School of Medicine at Mount Sinai in Manhattan”, the Jewish News reports.

Once they solidified their idea, the pair acquired the best consumer drone and rebuilt it for the naloxone delivery. They then obtained an emergency response data set from the Detroit city controller to help them gather the data points and distances they needed to test the drone for.

Next, they conducted 50 flight trials with the drone across seven different straight line distances. The data collected at the end of the trials proved that the drone travel times are faster than ambulance arrival times.

“We wanted to have a reference as to what a paradigm was currently for Detroit first responders responding to the scene of opioid overdoses,” Matthew to the paper. “We took their data and compared it to ours that we acquired, and we found that our drone was as fast, if not faster, than Detroit’s first responders.”

If cities do incorporate drones, they would need to develop drone deployment centers near high overdose areas. The brothers shared that these centers would allow for drones to be quickly sent out to reach the patient and empower bystanders to assist before the arrival of first-responders.

While the Tukel’s research show positive results, there is still more research that needs to be done before we see drones delivering the medications.

“We validated the intuition that a drone can travel faster than an ambulance in an urban environment,” Connor said. “The trials were very controlled and we need to now look at real-world practical considerations.”