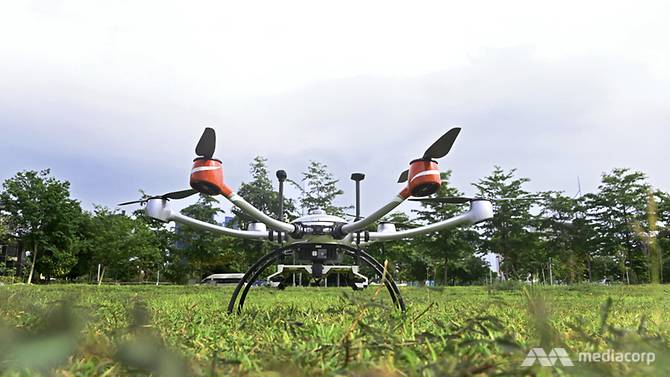 Why did the chicken cross the sky? This week, five packets of ayam penyet did, when food delivery service Foodpanda used a drone to deliver the popular fried chicken dish from the Marina South Pier to a ship located 3km offshore, reports channelnewsasia.com.

This was a welcome treat for seafarers aboard the POSH Bawean, a PACC Offshore Services Holding (POSH) vessel designated to support crew changes for cargo ships calling at Singapore during the Coronavirus pandemic.

Back in March, Foodpanda signed an agreement with Singapore Technologies Engineering (STE) to use DroNet (STE’s drone network system), to trial the delivery of light food items over distances of up to 3km.

The collaboration, dubbed “PandaFly”, aims to see drones picking up and delivering orders to and from designated collection points island-wide, with one of Foodpanda’s 12,000 delivery riders completing the last mile of the delivery.

This is not the first time Foodpanda has experimented with the use of drones for deliveries. The Berlin-based food delivery giant first did so in Singapore in 2015. Luc Andreani, Foodpanda Singapore MD, explained,  “The primary desire of using drone delivery is to increase the choice for our customers.”

He noted that while delivering food from the city to residents in the suburbs by motorcycle is possible, it can take a long time, which in turn affects the quality of the food. “PandaFly will allow Foodpanda to carry out island-wide deliveries without sacrificing quality,” he added. The initial technological investment is pricey, but Andreani stated customers would not have to contend with high delivery fees. “The idea is to keep such fees stable so customers don’t experience any price difference,” he continued, adding that economies of scale meant that the greater use of drones will translate to lower prices.

“As with any major innovation, in the early days, it is an investment for us, with the objective of making it economically viable in the future.” He did not specify when drone food deliveries would be made more widely available.

In February, ST Engineering announced it was collaborating with maritime group Wilhelmsen Ships Service on the development and testing of shore-to-ship drone deliveries in Singapore, which would allow the devices to be operated beyond the pilot’s visual line of sight.

The company’s DrN-15L  drone, which was used this week, is able to lift up to 2kg, and fly at speeds of up to 15 metres per second, with a delivery radius of up to 5km.

The use of such craft would allow for deliveries to fly directly from one point to another in a straight line, bypassing traffic and other obstacles, allowing for speedier deliveries. While it is unlikely that drones will do deliveries directly to homes, Teong expects there will soon be a network of collection points where the craft can take off and land from.  “I think it’s a realistic expectation of what might come in the next few years,” he said.

Mr Danny Chong, general manager for POSH’s Centres of Excellence (Innovation), said the usage of drones is an area that the company is “actively studying” as part of its innovation roadmap. “There is still much work to be done to fully enable shore-to-ship delivery over longer haul distances,” he said.

“POSH will continue to work with suitable partners so as to bring a taste of home to our seafarers on-board.”