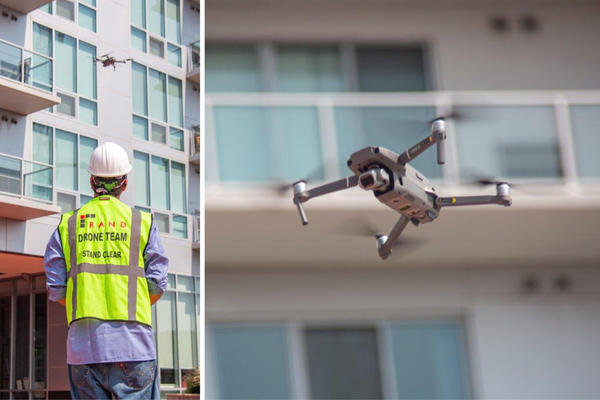 In a move that could revolutionise the way buildings are maintained in New York City, the city council has ordered the Department of Buildings(DOB) to study the safety and feasibility of permitting drones  to conduct façade inspections, reports habitatmag.com.

Under the Facade Inspection and Safety Program, commonly known as Local Law 11, owners of all buildings over six stories tall must conduct a facade inspection and make needed repairs every five years. For co-op and condo boards, this is a major on-going expense.

A bill sponsored by three Democrats, Robert Cornegy of Brooklyn, Ben Kallos of Manhattan and Paul Vallone of Queens, orders the DOB to determine whether the flying of drones would conflict with any rules by city agencies or the Federal Aviation Administration (FAA), and if such craft have the potential to increase public safety and reduce the need for sidewalk sheds. The DOB’s report to the city council was due on June 30th, but has been delayed by the coronavirus pandemic.

The one thing the bill fails to address though is the potential of drones to cut costs. A resident at a 183-unit, 12-story co-op in Guttenberg, N.J., knows all about such savings. “We had a leak problem, and the drone was flying in areas which are not really accessible to a human being,” says board member David Chew. The building is positioned on top of a steep, heavily wooded cliff. The garage hangs over the cliff, and the only way to inspect the integrity of the underside of the garage without a drone would have been to build a scaffold on the wooded cliff, a costly proposition. “We immediately got a very detailed look” via the drone, Chew continues. “And not only that, they got to take pictures and videos and covered a huge area in a short period of time. It was definitely more efficient than any other solution.”

Many U.S. cities allow the use of drones for building inspections and other purposes, provided the operators have approval from the FAA. “The most notable exception is really New York,” says Brett Rieger, a licensed drone pilot at RAND Engineering & Architecture who worked on the inspection at the New Jersey co-op. “For now, our drone team is doing jobs in the outer boroughs. We have two licensed drone pilots and one visual observer. Our main goal right now is to champion new laws for drone usage in New York City.”

One hurdle to the bill presently before the city council has nothing to do with safety. “The most basic concern about drones is that it’s up in the sky or in front of my window spying,” Rieger says. “From the city’s perspective, a drone in the wrong hands could be used as a weapon or it could fall from the sky, hitting people, which is possible if they are operated by someone who doesn’t know what they’re doing.”

With the support of Austen Brandford, senior legislative counsel for the New York City Council, RAND is pushing to ease the city’s drone rules. “These laws will have to ease up, because a drone can spot something that may fall down off a building, injuring pedestrians,” Rieger says. “With a drone, we could be there on a moment’s notice to inspect a problem, instead of having to wait for the permits and the construction of a scaffold and a sidewalk shed. When these laws open up, we will be ready.”

Current New York City regulations prohibit aircraft from taking off and landing in the five boroughs, except at public and private airports, heliports, seaplane bases and in emergencies. And FAA airport regulations ban aircraft from most of the five boroughs, with the exception of lower Manhattan, the northern edge of the Bronx, the western half of Brooklyn and most of Staten Island.

“The new law needs to address what a drone can safely do,” Rieger says. “There would be a lot of advantages for buildings that need facade inspections.” Just ask the co-op board in Guttenberg, N.J.