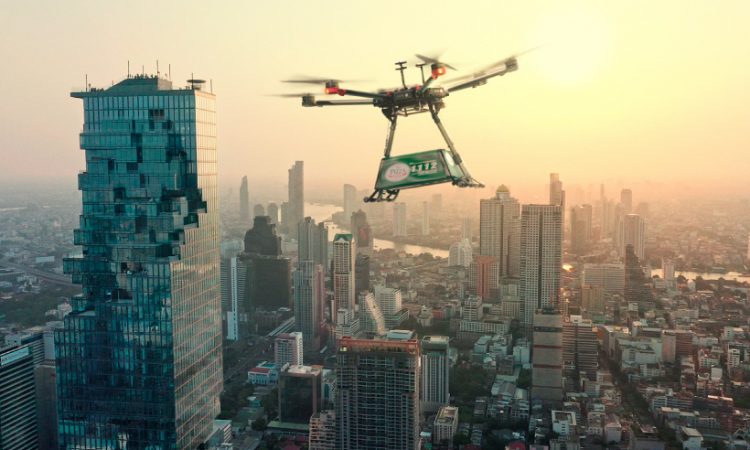 Chicken Deluxe, Seafood Cocktail or Tom Yum Goong? Whatever type of pizza you want, even plain old pepperoni, them slices could some day fall from the sky thanks to an autonomous aerial vehicle, reports coconuts.co.

In an expensive-looking video released Friday, megachain The Pizza Co. unveiled plans to deliver its pizza and other food items by drones. It said the unmanned delivery system would solve problems by keeping food fresh, delivering them on time, whilst beating the capital city’s increasing traffic congestion.

The firm, however, said drone delivery plans are only in the “research” phase to explore the “technical possibility,” in the hope that regulations would be freed-up, to make such deliveries possible.

Flying a drone requires a registration and permit from the National Broadcasting and Telecommunication Commission and Civil Aviation Authority of Thailand, either for recreational or commercial purposes.

The idea is not new. In 2016, Domino’s Pizza in New Zealand demonstrated airborne pizza delivery into the backyard of a couple in Auckland. The company then unleashed delivery drones in Germany and the Netherlands. Retailer Amazons has been developing a similar delivery system.

The Pizza Co. made its debut in Thailand in 2001. It is part of Minor Food Group, a subsidiary of conglomerate Minor Corp that owns other food and beverage holdings such as The Coffee Club, Sizzler, Burger King and Swensens.