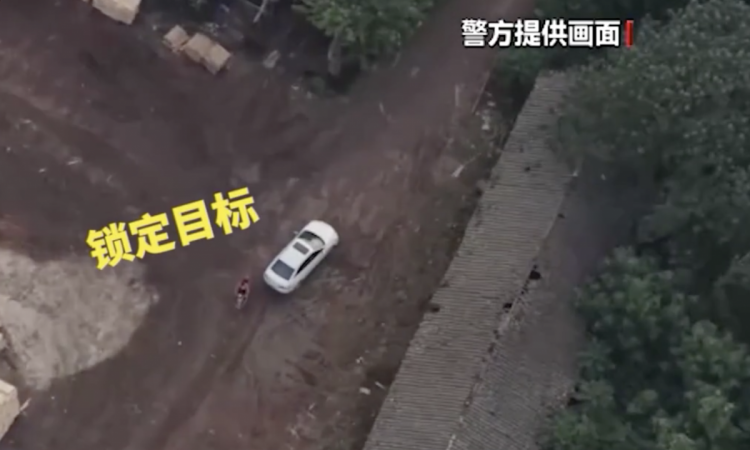 Chinese Police filmed recently an alleged drug dealer exchanging goods with a customer at a secret location discovered by a drone, reports scmp.com. China’s increasing use and the way they are employed, is becoming ever more draconian, some suggest, when privacy concerns about drone policing persist.

A recent example is the drone footage supplied by police in the southern city of Guilin that shows authorities secretly trailing a suspected drug dealer. Illegal drug deals are typically surreptitious operations, but Chinese police said they managed to catch one in action by deploying an unmanned craft.

In a video shared with state broadcaster CCTV, authorities in the southern city of Guilin were shown tailing a suspected drug dealer, but instead of sending officers on the road, they deployed a drone.

The operation led them to an abandoned brick factory, where a customer was already waiting in a car. The suspects were seen to be exchanging what police said were drugs and money, seemingly unaware of the drone recording above them. The entire process was live-streamed to officers on the ground, who eventually arrested four people.

Reactions on social media were mixed with some praising the police operation. “Technology empowers the fight against crime,” one Weibo user commented. Others wondered if police surveillance in China might soon reach new heights. “Will BeiDou be used to collect evidence a few years from now?” Another Weibo user wondered, referencing China’s satellite system that is designed to be a GPS alternative.

In the southern province of Fujian, police use drones to monitor traffic infractions, using attached loudspeakers attached to the craft. Police shout instructions at offenders on the road like, “Put on your helmet, please!” Traffic-monitoring drones can also be found in other towns and cities including Shanghai and Wuhan.

The deployment of drones for public shaming became especially popular during the Covid-19 pandemic. Across cities and villages, citizens who dismissed social distancing rules to attend mahjong gatherings or refused to wear a mask outside faced loud, public warnings from drones.

Yet, none of these examples are as dramatic as one that happened last year in the hilly southwest province of Yunnan. A 63-year-old convicted human trafficker was finally captured in a mountain cave after being on the run for 17 years. Police said they had been searching the area with a drone for nearly five hours before they discovered a piece of blue tile in the middle of a cliff, indicating that someone was living there.

Law enforcement authorities around the world have hailed the benefits of using drones, especially in dangerous situations or inaccessible locations. But privacy rights advocates have also cautioned against the excessive use of drones in policing. Critics say that the government should establish appropriate controls to determine when drone policing should be allowed and how drone footage is stored.