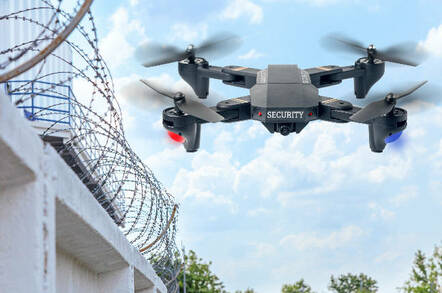 According to the online publication register.co.uk, late last week the Neath Port Talbot Council, which serves the Welsh towns of Neath and Port Talbot, began working with local police and the ‘Safer Neath Port Talbot Community Partnership’ to deploy drones “to distribute public information” in the area.

The police and community groups say they’re focusing on areas where people are not following government social distancing recommendations.

“The drones are equipped with speakers that will transmit messages directly to the public,” said the Neath Port Talbot Council via Twitter. “We are reminding residents to stay at home except for: shopping for necessities, obtaining medical supplies, one period of daily exercise, and traveling to and from essential work.”

The post includes video of a drone lifting off from the pavement outside a SpecSavers’ optical retail store. A polite but emphatic voice can be heard from the drone’s on-board speaker directing anyone within earshot to follow government rules and stay home.

Yet, some in Britain are not happy with their usage. UK-based privacy group ‘Big Brother Watch’ denounced the drone public announcement scheme as Orwellian. “Drones are an unnecessarily sinister way of communicating public health advice,” the group said via Twitter. “It must stop!”

And this criticism increased when Derbyshire Police used unmanned craft to photograph car number plates and assist officers in stopping vehicles and shaming ramblers and dog walkers around the scenic destination of Curbar Edge in the Peak District National Park for flouting government health guidance.

Even so, World governing authorities are increasingly employing drones to help combat covid-19 and keeping the public lockdown in place. For example, the Lithuanian capital Vilnius, has been issuing information to older citizens, informing them that they should stay home with flyers delivered by drone.

The Municipality of Burgas, a seaside city in Bulgaria, announced that it will be measuring the temperature of its citizens with a thermometric camera placed on a drone. This will take place mostly in the city areas with predominant Roma population, where people live in cramped surroundings  and sanitary conditions are low.

Life will never be the same after the pandemic passes, but the publicity drones have gained and their “use for good” will be immeasurable.