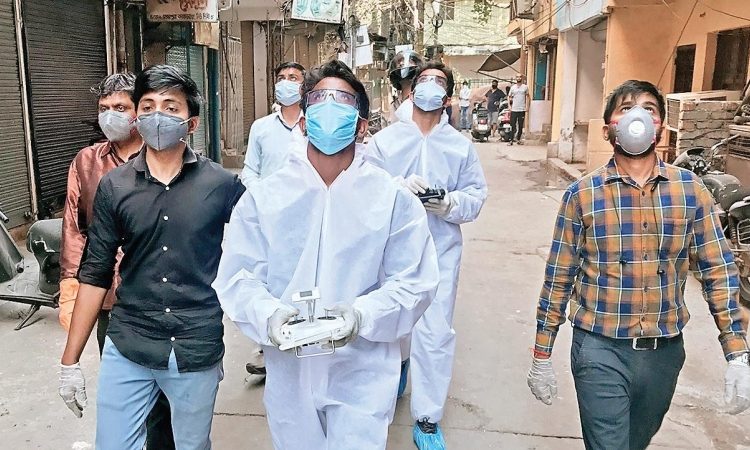 In an air-conditioned government building in Mumbai, a dozen officials are glued to a giant screen showing live drone and CCTV footage of crowded slums, the front line in the city’s battle to contain the spread of the coronavirus pandemic.

When drone cameras captured dozens of shoppers thronging a market in Mumbai’s poor Dongri area, violating the countrywide lockdown that started on March 25th, officials called in the police to disperse them. Twenty minutes later, the footage from Dongri showed only a handful of people still milling around.

According to the globeandmail.com, to help enforce a lockdown in what is one of the most densely populated areas on Earth, authorities are using drones, reoriented traffic cameras, and heat maps, but these can fall short when it comes to its maze-like slum alleys.

“Hundreds will fall through the cracks, perhaps thousands,” comments Praveen Pardeshi, who heads the city’s main civic body. “But as long as it is not in millions we are safe.” Mumbai is home to around 12 million people, of which some 65% live in slums. Confirmed cases in the city have ticked up above 1,900, including 113 deaths, making up around 15% of India’s more than 12,000 known cases.

Authorities have used drones to help cordon off parts of the slums, set up special fever clinics and created massive quarantine centres in a stadium and empty government buildings. Asif Siddiqui, a construction shop worker who lives in a one-room apartment with six family members, has stayed put though. “They ask us to keep one meter distance, but my home is two meters long. We are trying to co-operate, but it is impossible to do this,” said Siddiqui.

In Delhi, authorities are using more widespread measures to combat the virus.

According to newindianexpress.com, the CCD is equipped with geo-fencing technology, which means it can autonomously cover any remote area. It’s inbuilt carrier has a capacity of over 5-20 litres of sanitising liquid that can go up to a height of 20-55 metres, and can cover a 1.5-2km stretch with a 10m periphery in one go. Set up four years ago by two engineering graduates, Sagar Gupta Naugriya and Prashant Pillai, the original agricultural usage has been remodelled for sanitation.

“Through the CCD, we can sanitise a large number of areas in a limited time frame, and prevent the virus from spreading,” says creator Naugriya. After it was remodelled, a demo was given for the North Delhi Municipal Corporation. So impressed, the CCDC was immediately employed. “The pilot run was done at Shakurpur, and 15 colonies have been covered so far, he continues. “These include Karol Bagh, Patel Nagar, Lal Bagh, Sadar Bazar, Ashok Vihar, Narela Bagh, Paschim Vihar and many areas of Pahar Ganj.

“We also sanitised a quarantine camp in Narela that has over 2,000 people living in it. Our pilots were brave enough to hover their drone in and around the quarantine area,” says Pillai.“We target those regions that are remotely located and are not easily accessible through the sanitising tanks. If an area has high number of infected patients and the sanitation team is sceptical to go, CCD can do the job,” Pillai adds. “Requisitions have also come in from Gaya in Bihar and Lucknow in Uttar Pradesh.”

The duo have also developed a thermal imaging CCD. “This is India’s first multipurpose drone with thermal imaging that can detect, take a record for the authority, as well as the body temperature of the person in the frame,” explains Pillai. This drone is transformable and can accommodate a medicine box to carry essentials like portable corona testing kits and medicines, spotlight for night utility, speaker for giving instructions as well as a disinfectant tank in addition to a thermal imaging camera. “If we come across a person with high temperature, he can be taken away by the authority and the area around him can be sanitised at the same time using the same drone,” continues Pillai, adding that talks are on-going with Delhi Health Ministry and Chandigarh police, both of whom have shown interest in these services.