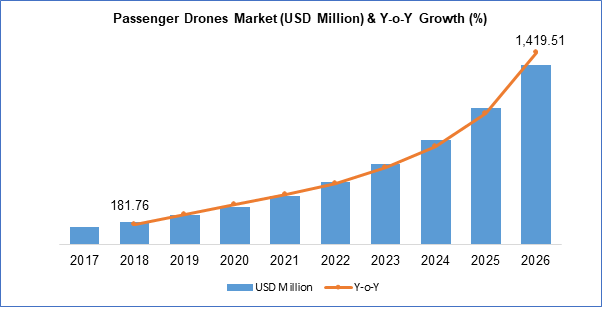 According to dronelife.com, the market size of passenger drones will grow strongly during the next six years, to a predicted and astronomic USD1.42 billion.

Forecasters say the ability of vertical take-off and landing transport (VLOT) can not only replace driving on roads to ease congestion in busy cities, but will aid rescue and search as well as emergency delivery and air ambulance operations. Also, the demand for cheaper, faster and cleaner transport is very high, particularly in European cities.

The major market players in the passenger drones market include Ehang, Volocopter, Uber Technologies Inc., Boeing, Airbus S.A.S., Astro Aerospace and Lilium. Polaris Market Research recently released a new report that predicts the global passenger drone market to grow at a rate of almost 30% during the next six year period.

The report states, “Passenger Drones will solve the problem of transport during peak travel time and overcoming obstacles like bridges or lakes. Not just daily commute, passenger drones can be of great significance in adversities and be used for rescue, search operations, emergency supply delivery or air ambulance.”

As Europe’s cities suffer increasingly from road traffic congestion and pollution, the demand for alternatives is high. “The growing need for cheaper, faster and cleaner transport is increasing the demand for transport alternatives,” continues the release. “The increasing demand for intelligent technologies that reduce emissions and offer higher energy efficiency play a key role in the passenger drone market growth.

The investment interest for passenger drones is strong too.  Hardware costs are dropping, and regulations appear to be getting more favorable. Demonstrations in Spain  have recently been announced by industry pioneer eHang; and a working passenger drone service has been in place since 2017 in Dubai.

The research report goes on, “The leading market companies are consistently launching new products and solutions to enhance their offerings as well as acquiring other companies on the cutting edge of technology.”