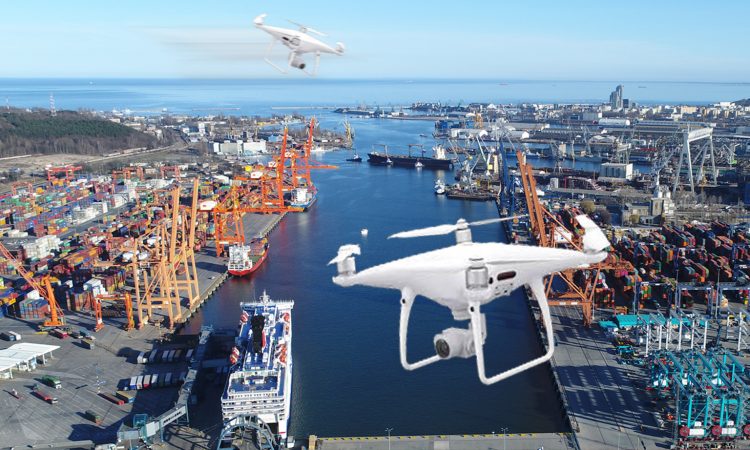 The Port of Gdyni in Poland has hired drone operator, Pelixar, to monitor the environment and security within the PoGA S.A. area support its fire brigade during firefighting and rescue actions.

“The drone’s construction is to be adjusted to conditions prevailing at the Port of Gdynia. Starting cooperation with Pelixar S.A., who has also signed an agreement with e.g. the Pomerania Development Agency for creation of an automatic drone system for Search and Rescue actions, will provide an innovative approach to the issue and professional know-how.” said the Port in a press release.

“We have signed a letter of intent with Pelixar S.A. which results in a broad cooperation in scope of drones, especially those providing security within the port. We are going to use their know-how to create an effective system of airborne monitoring at the Port of Gdynia with the aim to safeguard our clients and cargoes”, explains Adam Meller, President of the Port of Gdynia Authority.

Dynamic development of the Crewless Aircraft market may potentially bring a number of opportunities for the business. Poland is a special location on the map of drones. We owe our position to a very user-friendly legislation, quick development of crewless technologies and the largest, after USA and Japan, number of UAVO certified operators. However, Poland’s greatest asset remains Central European Drone Demonstrator (CEDD), whose task is to develop recommendations procedures for future legislative processes. Within CEDD there are DroneLabs, i.e. task units that focus on specific sectors, such as U-Space, Transport, Environment, Energy or Security. According to agreement of 30.09.2019 the Port of Gdynia became owner of the Security DroneLab, one of the most promising and interesting CEDD sectors. The Port of Gdynia, being a dual-purpose port and operator of critical Polish infrastructure and HNS host, treats port security as a matter of priority.

In April 2019, at a conference called “Critical infrastructure and mass event security in the era of technological breakthrough of XXI century” the Port of Gdynia Authority S.A. announced its plans of introducing an innovative, complete drone system based on 3 pillars:

“Such a pilot programme will place the Port of Gdynia high in the hierarchy of world’s seaports. At seaports and airports alike the main issue is the security of transport, infrastructure, crews and of course passengers”, says Sebastian Nowicki, COO of Pelixar S.A.