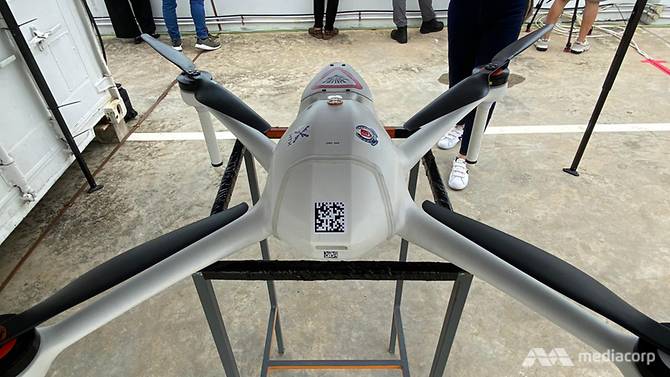 New drones which can fly beyond the operator’s line of sight, and which can be operated without an on-site operator, are currently being trialled by the Singapore police, who hope to use it to complement their ground operations during the COVID-19 outbreak report, channelnewsasia.com.

The trials, which first began in late April, focus more on flying over and scanning industrial estates in the Western part of the country. These tests each last for around 30 minutes and will only end after enough information on data system reliability and mission effectiveness has been collected.

“The industrial estates can get rather deserted during this lockdown period, so the police need to keep up their presence for any illegal or unusual activities,” said DSP Elvis Chong, commanding officer of the Clementi Neighbourhood Police Centre that oversees the area where the craft are flying. “The deployment of drones complement our police officers in keeping the industrial estates crime-free.” Chong continued, “We don’t want criminals to have an opportunity to break into these empty warehouses or office areas, especially during this difficult period.”

Developed by HTX and its partners, the drone weighs 10kg and uses an advanced mode of unmanned flight operation through a Drone Box concept. The craft can be operated remotely from a back end command and control centre and eventually fly beyond visual line of sight.

“What is found inside this drone box system is a series of what we call robotics and automation system, where mundane preparatory tasks like battery insertion, battery preparation, picking and swapping of the payload that’s required for that specific mission has been automated away by the drone box system,” said senior engineer at Robotics, Automation & Unmanned Systems Centre Low Hsien Meng, who is involved in the trial.

This means that the operator would need minimal training to operate the drones, as it would only require a few clicks of a button to start the flight. A separate wireless network is used to transmit data from the drone to the command and control centre.

The Singapore police are looking to extend their use in the future. Autonomous drones will allow them to view difficult-to-access areas and provide a “safer and most cost efficient way of gaining greater insights in critical operations”, said a police report.

“Without the need for an on-site operator, these drones can operate safely in the most hazardous and remote sites,” the report continued, adding there was “huge potential” for these craft in public safety, search and rescue and delivery of supplies.