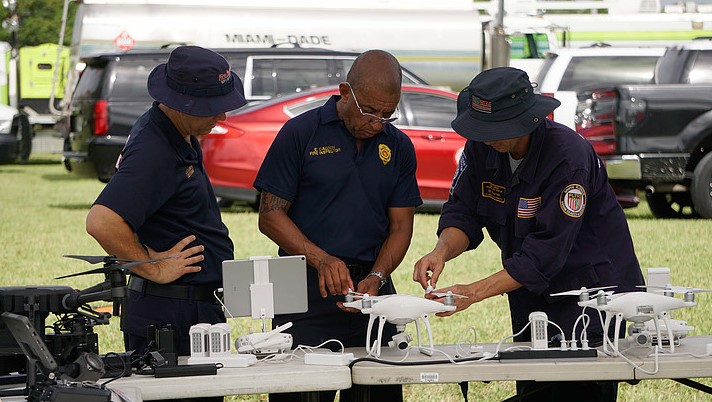 South Florida first responders spent the weekend of 13th July simulating use of their unmanned aircraft systems (UAS) in the event of a major hurricane landfall in their region.

The Southern US’ hurricane season is well underway and the team’s practice took place as Hurricane Barry caused havoc along the coast in Louisiana.

The primary objective of the UAS DRONES Disaster Exercise was to provide a realistic testing environment to assess the various capabilities of first responder drone teams during a large-scale incident response.

Todd added that the UAS exercise at FIU had been the first time drones were the focal point rather than an ancillary element of a scenario. This means participating flights teams receive significantly greater time operating drones in a variety of situations – exposure they don’t typically receive at most disaster exercises.

For Justine Hollingshead, the Chief of Staff and Assistant Vice Chancellor at NC State University, the harsh conditions reminded her of the days flying drones in the aftermath of Hurricane Florence in North Carolina, last September.

“It was hot, it was humid, and it reminded everyone that successful emergency response operations involve much more than fancy technology,” said Hollingshead. “The FIU exercise provided the type of environment for drone operations that you just won’t experience in a table-top simulation.”

While Todd was pleased with the exercise outcomes, he said there was still a great deal of work to be done – especially surrounding data management and geospatial information systems (GIS).

AIRT’s new DRONERESPONDERS program will serve as a focal point for advancing the link between UAS operations and data management and intelligence within the public safety sector, he added.

“We are now more prepared than ever to successfully operate drones during disaster operations,” Todd said. “Now we must move beyond operating the drone and shift the focus to conducting actual remote sensing and harvesting data resulting in actionable intelligence for emergency management.”