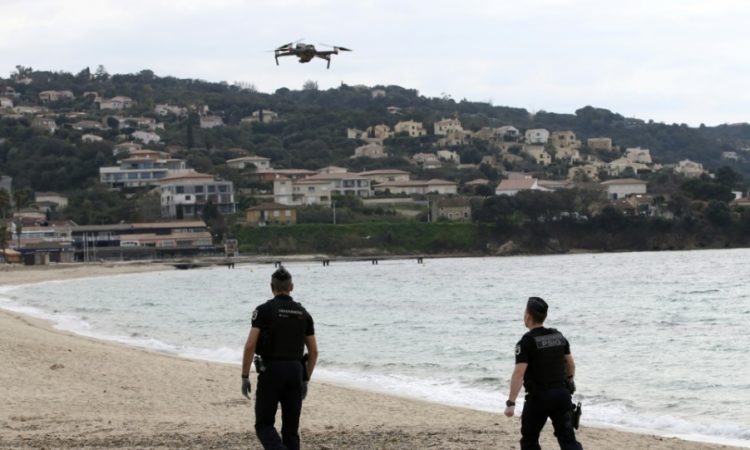 Young German adults hold “corona parties” and cough toward older people. A Spanish man leashes a goat to go for a walk to skirt confinement orders. From France to Florida and Australia, kitesurfers, college students and others crowd the beaches.

According to local10.com, their defiance of lockdown mandates and scientific advice to fight the coronavirus pandemic has prompted crackdowns by authorities. In some cases, the “virus rebels” resist and threaten police officers. This has led to officials expressing outrage and using more extreme measures.

“Some consider they’re little heroes when they break the rules,” said French Interior Minister Christophe Castaner. “Well, no. You’re an imbecile, and especially a threat to yourself.”

The French police are using various means to control such “imbeciles” and one are drones. Presently, the authorities are employing them to patrol closed beaches and the banks of the River Seine along the popular Paris walkway.

Nice Mayor Christian Estrosi, who himself is infected with the virus, has already used his municipal powers to impose a 11pm – 7am curfew on the city, an initiative not yet seen in Paris or other parts of France.

France now has 100,000 security personnel on the streets who are issuing fines amid a new national “Stay Home” mantra and, like Italy, are increasingly using drones, in general, to sound warnings above the streets to the public who are ignoring the lockdown. According to Health Minister Olivier Véran, the country’s two-week confinement could be extended if the infection rate keeps rising.

In Italy, where the virus death toll soared beyond China’s last week, authorities are still attempting to rein in people from going outside for fresh air, sun and visits with friends to escape “cabin fever”. Drones and their loudspeakers are being employed, like in France, to warn people to stay at home, remain calm, and to socially distance.

An increasing number of American authorities are also using drones to patrol beaches, after Florida’s governor closed them when seeing images of rowdy spring-break college kids on TV. Australia has shut Sydney’s Bondi Beach after police were outraged as well at pictures of the crowds.

New York Gov. Andrew Cuomo said Saturday that people from 18-to-49 account for more than half of the state’s coronavirus cases, warning them “you’re not Superman, and you’re not Superwoman.”

As new Covid-19 cases in China dropped to zero several days in a row, the chief medical officer for the International Clinic of Wuhan was alarmed at those elsewhere refusing to follow rules. Dr. Philippe Klein said people should look to China’s confinement of tens of millions as an example to emulate, “with courage, with patience, with solidarity.”

“I exhort you,” pronounced Klein, “to apply the rules in our way.”