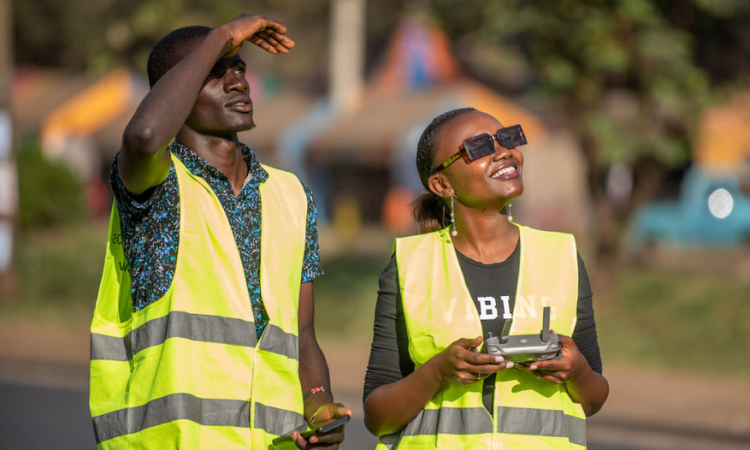 WeRobotics reports on its website that together with researchers at the Laboratory of Urban Transport Systems (LUTS) at EPFL (one of Switzerland’s leading polytechnic universities), and Kenya Flying Labs it has embarked on a joint experiment to test LUTS’ innovative approach to traffic congestion in Nairobi, which is ranked as the world’s 4th most congested city, with a potential cost of USD 1 billion per year and around 40% of total CO2 emissions – according to a 2019 report by Nairobi Metropolitan Area Transport Authority.

“Drones provide excellent visibility, can cover large areas, and are relatively affordable. What’s more, they offer greater precision than GPS technology and eliminate the behavioural biases that occur when people know they’re being watched. And we use drones in a way that protects people’s identities,” says Manos Barmpounakis, a post-doc researcher at LUTS.

In its report WeRobotics says “The proof of concept consisted of acquiring drone video data on two major roads within the Nairobi metropolis: Ngong and Jogoo.  While LUTS has been leading in unique experiments with drone swarms for traffic monitoring, this was the first time a swarm of drones would fly over Nairobi. And operating drones in such a sensitive and complex urban environment involved important logistics, negotiations, and discussions to secure the flight permits, which was possible thanks to the critical local partnerships and close collaboration with the Kenya Urban Rural Roads Authority (KURA) and Kenya’s Presidential Delivery Unit (PDU).

“Kenya Flying Labs managed all operations and logistics locally, supported by WeRobotics’ Drone and Data team for planning and technical and safety support. The swarm of drones of the experiment involved 5 drones on each road, so a total of 10 drones. This translated to bringing together a team of 10 certified drone pilots and supplementing each pilot with an assistant/spotter, so a team of 20 pilots and assistants. The 10 drones – a mix of DJI Phantom 4 Pro and Mavic 2 Pro – were coordinated to fly during the morning traffic peak hours (6:30 – 9am) and the evening traffic peak hours (4 – 6:30pm) over 4 days to meet EPFL’s data requirement needs. In addition, Kenya Flying Labs’ team coordinated with the traffic police on Jogoo and Ngong roads for smooth operations and the Moi Air Base control tower, which was always kept abreast of daily operations via mobile phone calls before and after each mission.

“Throughout the 4 days, the team of 20 drone pilots and spotters managed to capture over 87 hours of video and over 4 TB of data. The first outcomes already confirm that drones are a viable option for traffic monitoring, and with the data now in the hands of the EPFL LUTS team, we look forward to their analysis and outcomes in the coming months.”