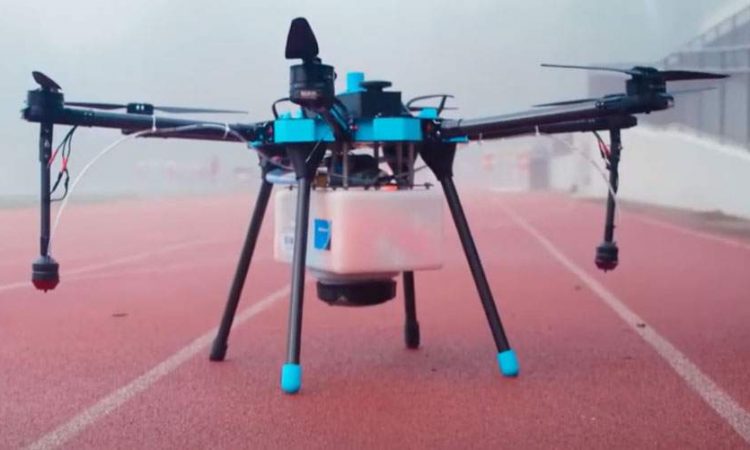 Upward Drone Solutions (UDS) based in Pensacola Beach, was only in business for a few months before the coronavirus hit and its primary work of cleaning building exteriors dried up, reports clickorlando.com.

But now as Florida State experiences an epidemic in cases of COVID-19, where there have been nearly 10,000 new reports  per day for the last few weeks and where on July 12th, the State broke the national record by reporting 15,300 cases in 24 hours, the demand for the company’s drones has soared.

Andy Godfrey, CEO, explained they reconfigured a 55-pound drone from its original use of cleaning the outsides of buildings, such as hotels, to disinfecting surfaces with a powerful sanitiser. “Exterior commercial cleaning just ended. A lot of places closed down,” Godfrey said.  “We knew we had to adapt and given the present situation, this has become very significant.”

UDS has now been operating for about two months as a sanitation cleanser, where the company is able to clean entire facilities like stadiums, schools, parks, music venues and airports.

Godfrey flies the drone about eight feet in the air where it then emits a very fine mist of cleansing spray out of an attached storage tank to completely coat surfaces. He said the mist is electrostatically charged to ensure it binds to surfaces. With the mist, surfaces that aren’t touched often will be safe from germs for a couple of weeks while on highly touched surfaces, the spray may last three to four days. Godfrey uses a tool called an illuminometer to show if there’s any remaining germs on surfaces once the spray is complete. “It’s become an exercise into trying to restore public confidence and peace of mind as people resume life as they once knew it. And that’s not something you can legislate for,” Godfrey said.

Jim Sparks, program manager for the University of West Florida’s Centre for Entrepreneurship, said during challenging times like the pandemic, it is important for entrepreneurs to adapt, so they can continue to provide goods and services the community requires.

“We have to come up with new ways to engage with each other in public settings, and so the work that they’re doing is really important to helping us be able to return to public spaces and feel safe while we’re there,” Sparks said. “Basically we’re creating an environment for people to come into that is germ-free,” Godfrey added.

The company demonstrated the product at Florida’s Blue Wahoos Stadium. Godfrey said its size  would only take his drone an hour and a half to completely sanitise, which he believed to be much faster than more traditional methods like using a backpack sprayer.

His drones can fly for about 10 minutes at a time before needing a battery change and a tank refill. In that time, they can cover 17,000 square feet , on flat surfaces and with winds of no-more than 10 miles per hour.

Upward Drone Solutions plans to expand advertising efforts across Florida to grow the business. “It’s been a very fluid situation,” Godfrey concluded. “Obviously what we started doing is not what we’re doing now. We will follow wherever the drone leads it.”