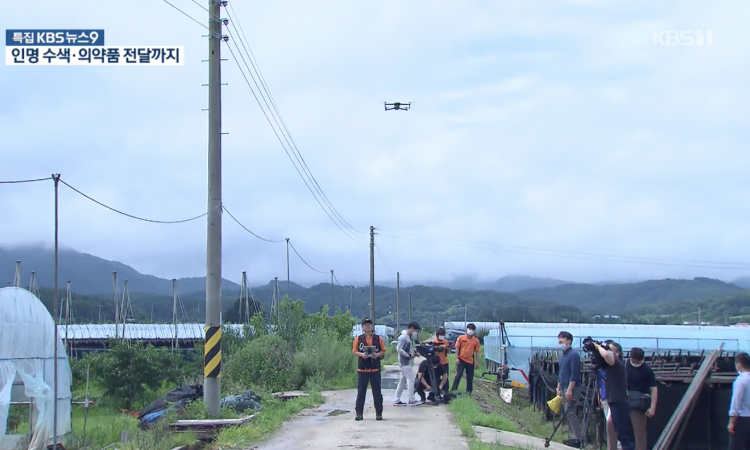 There are increasing numbers of stories covering the ‘drones for good’ hashtag and how welcome they are, reports dronedj.com. The latest story is that of a DJI Mavic 2 deployed in South Korea to fly asthma medicine to a 7-year-old boy in a flooded area. 2020 has been a terrible year for flooding in Southeast Asia. There have been widespread floods throughout Southern China and South Korea is the latest country to be hit.

This gripping story first appeared on KBS News. A father in a flooded village in South Korea desperately needed medicine for his 7-year-old child. The boy suffers from asthma, and his medication had run out. The flood prevented anyone from delivering the prescription by ground, so without these critical meds, the child could face a physical collapse.

Hail the white knight of the skies. A drone delivered the asthma inhaler to the grateful father. He told KBS News, “I couldn’t even imagine. I thought they were going to come with a helicopter or something like that and fly my boy out.” Yet, it was a Paramedic’s vision who realized a drone could be employed by attaching the much needed medication to the craft. As he explained, “I have a drone, so I thought let’s try it. So I put a bronchodilator drug on it and sent it.” The package was flown 1.5 kilometers across the rapidly rising Geum River.

During the KBS News film footage you can see the boy’s father anxiously awaiting the delivery of the package. The news program also points out that drones have been used to assist in other situations during the flooding, including delivering heart medication.

Increasingly, drones are being used for rescue missions like this following natural disasters. Not only can the craft deliver critical medication, but they can also be used to scan infrastructure for damage. Following major hurricanes in Texas and Florida in recent years, drones have been immediately put to work for situational awareness, providing a bird’s eye view of the damage. This has been particularly useful for planning emergency supply routes, as well as assessing overall damage in a fraction of the time it used to take.

Watch the news footage of the event