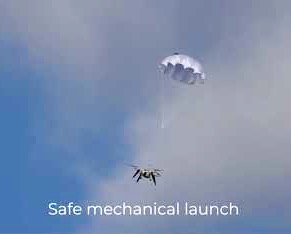 Israel’s Percepto claims to be the most deployed autonomous drone-in-a-box solutions, reports dronelife.com. Safety is an integral part and paramount for any system designed to operate without the required intervention of human pilots.  Percepto has now announced the latest weapon in their arsenal: an integrated drone parachute.

The Percepto Sparrow is “the first on the market to offer an ASTM 3322-18 standard compliant integral parachute after completing more than 50 successful test flights,” says a press release.

“…The parachute feature is compliant with FAA standards and will expedite further the approvals for flying over people and beyond the visual line of sight (BVLOS) for Percepto’s Fortune 500 customers.”

The company announced last month that Florida Power and Light (FPL) would be using the Percepto Sparrow to evaluate power lines after challenging weather events.

Percepto says that FPL is the first utility in the US to gain approval for BeyondV Line of Sight (BVLOS). “…Percepto’s customers were also the first to gain BVLOS approvals for autonomous drones in industrial sites in Italy, Spain, Portugal and Israel,” continues the press release.

Raviv Raz, Chief Engineering Officer and Co-founder is quoted as saying, “ASTM compliance for the Percepto Sparrow parachute marks the pinnacle of its sophisticated safety features, further underlining its popularity as the most widely deployed drone-in-a-box on the market. Our customers operating major energy, mining and industrial sites can utilize the drone for critical missions knowing that their employees and infrastructure are safe even in the most challenging weather conditions.”

A drone parachute represents the ultimate plan B: a safe and soft landing in case everything else goes wrong.  Drone parachute systems have been critical not only in some BVLOS waivers, but also in waivers for flight over people.  Percepto’s parachute “has an integrated and independent power source, allowing it to reliably launch in all possible failure scenarios where loss of control might occur,” continues the release. “This includes battery failure, motor failure, or any other unexpected malfunction.”

See the parachute in action