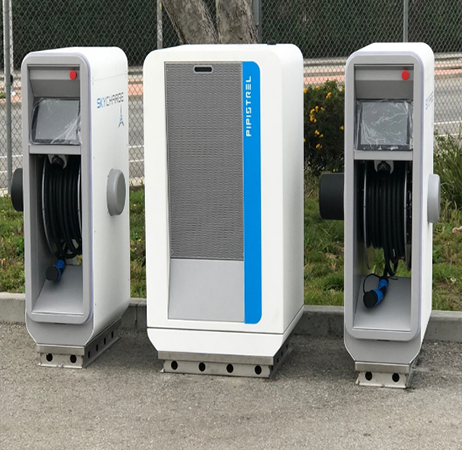 “Tomorrow’s Aeronautical Museum is planning to install additional Pipistrel SkyCharge docking stations throughout the County of Los Angeles system of airports.  San Gabriel Valley Airport, located in the City of El Monte, will be next to receive the docking stations. …The Pipistrel ALPHA Electro Light Sport is a 2-seat, single-engine, all-electric aircraft designed and manufactured in Europe specifically for flight training. The aircraft operates on a zero-emission lithium-ion battery, a sustainable source of energy which significantly reduces greenhouse gases. In addition, a recent study performed by Pipistrel showed that the ALPHA Electro operates at much quieter noise levels than do its gas-powered counterparts.

“The aircraft are currently certified to operate in rural areas and are in use at Fresno Chandler Executive Airport. Certification from the FAA to allow for operation of the ALPHA Electro within urban areas including the Los Angeles metropolitan area is anticipated to occur soon. Following certification, Tomorrow’s Aeronautical Museum will immediately put them to use at Compton/Woodley Airport.”