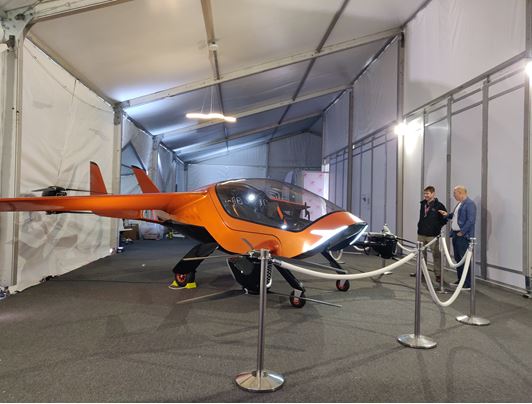 Today AIR, creator of eVTOL (electric vertical takeoff and landing) aircrafts for the consumer market, unveiled the full-scale prototype of its inaugural vehicle, AIR ONE, at the Kentucky Derby. Guests were able to sit inside the aircraft and experience virtual flight in the AIR ONE with AIR’s simulation technology.

The company says “complementary to ongoing development of air taxis for commercial use, AIR ONE allows individual consumers to experience the freedom of flight on their own terms. Capable of taking off and landing on any flat surface, the all-electric aircraft offers a range of 110 miles (177 km) on a single charge at speeds up to 155 mph (250 km/h). With collapsible wings, AIR ONE can be stored in most garages, driveways, and is suitable for trailer hauls”.

“Since coming out of stealth last year”, the company’s press release reports “AIR has completed a successful drop test and has finalized the first stage of the power and communication system integration. The company is also currently preparing to begin hover testing shortly and continues to work closely with the FAA to finalize its formal application en route to Step 2 of the G1 Certification Basis Document”.