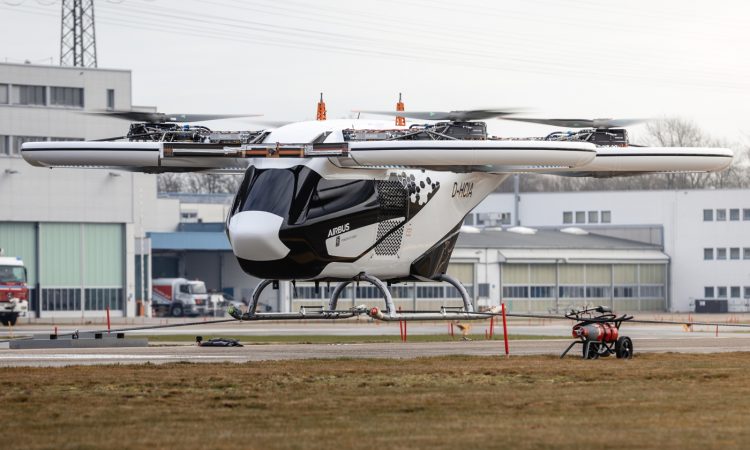 “We are continuing the test programme of our technology demonstrator Citybus,” said an Airbus spokesperson, according to eVTOL.com. “Airbus considers new forms of air transport such as UAM [urban air mobility] an opportunity to develop key technologies for the future of VTOL platforms, including electric flight and autonomy”, the spokesperson continued.

The CityAirbus eVTOL demonstrator features four ducted high-lift propulsion units, each containing a pair of fixed-pitch propellers driven by a total of eight 100-kW electric motors. It is a fully electric, 2.2-tonne air taxi prototype that made its first tethered take-off in May 2019 and began free flight testing at the end of last year. Like its tilt-wing predecessor Vahana, CityAirbus is being used to gather insights that will inform the development of future eVTOL models.

The eVTOL has been developed at Airbus Helicopters’ facilities in Donauwörth, Germany, with plans to conduct more extensive flight testing in Manching, around 70 kilometers (45 miles) east. “The test campaign is ongoing, the expansion of the flight envelope in Manching is on the agenda, but due to the current situation we can’t give a timeframe,” the spokesperson said. “Of course covid-19 has slowed down everything.”

While the pandemic has merely slowed the progress of CityAirbus, it has brought other programs to a halt amid what Airbus CEO Guillaume Faury described as “the gravest crisis the aerospace industry has ever known.”

Notably, on April 24, Airbus and Rolls-Royce announced that they had mutually agreed to terminate their E-Fan X program, a hybrid-electric technology demonstrator based on a BAe 146 regional airliner.

“As with all such leading-edge programs, we constantly evaluate the best way forward and it has become clear to both parties that the actual requirement to carry out a test flight with all the elements integrated is not critical at this time,” explained Rolls-Royce chief technology officer (CTO) Paul Stein in announcing the decision to end the project.

Airbus CTO Grazia Vittadini emphasised that Airbus nevertheless remains fully committed to decarbonizing aviation, and has used its learnings from the E-Fan X program to develop “a more focused roadmap on how to progress on our ambitious decarbonisation commitments.”

“We’re steadfast in our belief that there’s no world in which the future of air travel is not a sustainable one,” she stated. “As we start to navigate the realities of a post-COVID-19 world, I’m more certain than ever that we need to continue full speed ahead with our sustainability ambitions.”