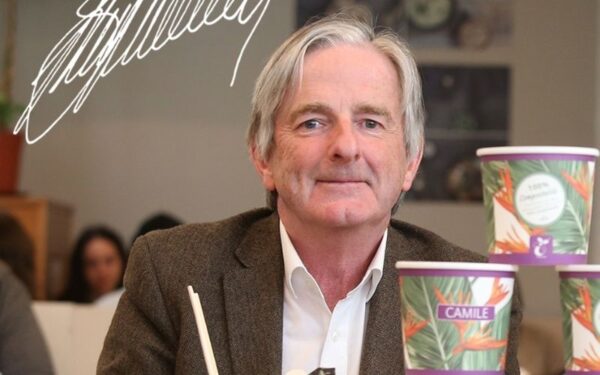 Camile, the “UKs fastest growing Thai chain”, and a company now seeking EUR10 million backing to expand its business, is aiming to have their take-outs delivered by drone next year with the UK following soon after, reports businesscloud.co.uk.

Founder Brody Sweeney says, “This is not a publicity stunt. Ours is definitely not promotional.” Sweeney is the man behind the O’Briens sandwich cafe chain founded in Ireland in 1998, which then operated in 16 countries before going into liquidation eleven years later.

He set up Camile in 2010 as a ‘fast casual’ Thai food chain focused on health and sustainability. The brand is now operating in most Irish cities and during the last 3 years, the company has established six outlets in South London. Investors include Web Summit founder Paddy Cosgrave; Bobby Healy, founder of drone delivery company Manna;  as well as senior partners in Venture Capital firm, Draper Esprit.

Sweeney says the brand quickly adopted technology to manage its kitchen logistics including off-site app orders, which can be up to 80% of the day’s activity. Due to this tech business model the restaurant has survived Covid-19 lockdown. “It’s been good for us,” says Sweeney. “We’re in suburbs and we do home delivery. That’s the only game in town in food service at the moment.” He continues, “You’ve got good Asian brands in the UK like Wagamama, Yo Shushi! and Busuba in London, but nobody’s focused on the home delivery side. It’s an amazing opportunity because it’s not just the UK, there’s nobody in the States who’s focused on that either.”

While Sweeney recognises the well-established third-party delivery apps such as Deliveroo and Just Eat as a vehicle for despatch, he now wants to beat them to customers’ doors with drone delivery. In Ireland Sweeney estimates around 80% of business is done through its own channels, helped by having established the brand and app before Deliveroo was even founded.

He explains, “It’s really the big challenge for us, not to be too dependent on Deliveroo or Just East because the business isn’t viable if we are.” In London, it is closer to half of the business, but Sweeney hopes that will come down, in part with the help of drone transportation.

Camile’s delivery is being provided in partnership with Dublin-based drone firm Manna. When the service is live, users of the Camile app select a square on Google Maps to where the food is to be delivered. The take-away is then cooked and loaded into one of the drones, which are housed on a shipping container set down beside the restaurant. The craft take off to around 400ft and fly up  to 80kph to the allocated space.

A text message lets the customer know that the drone has arrived, at which point it drops to 40ft and the food is lowered on a piece of biodegradable string. “The technology works perfectly,” Sweeney says of the firm’s extensive testing to date.

Drone delivery costs about half that of a delivery driver, can fly in 90% of weather conditions, and gives off no emissions, which Sweeney says, “makes it a no-brainer.” He believes these drones could complete around 80% of the deliveries currently made by traditional transport.

But there is a huge problem: Flight regulations. Drones currently have to meet the same safety requirements as a commercial jet. As Sweeney points out, getting clearance for a flight path from the Irish Aviation Authority is easy, but when there are thousands in the sky it will get more complicated. The second huge problem: How will the public react to having lots of drones flying above their heads? What of the safety aspects?

“If” these major hurdles are overcome, Sweeney is confident that drones in the sky will rapidly become commonplace, especially once the logistics of aviation clearance are automated.  He believes other authorities will quickly fall in line.

Prior to the pandemic, Camile’s plan was to have drones in operation by the end of this year, but Manna switched to supporting Irish health services with delivery of prescriptions. Those hoping to get such a delivery will need to live no more than two miles from one of the drone-based sites. “They are coming. There’s no question about it,” says a confident Sweeney. “Drones are built to deliver food. The typical payload is about 2kg, which is perfect for a drone.”

He continues, “I don’t think 10,000 aircraft in the sky is a problem, that’s just a computer working out flight paths. And there’s no security issues because the drones don’t carry cameras, so there’s no videotaping over people’s properties.” Although, the craft’s two-mile radius does mean more locations are required.

The firm is also looking to bring robotics into the cooking process, resulting in even more automation from the point of an order. Sweeney explains, “Cooking on a wok for us is a repetitive task, it’s mechanical. We are trialling a version of a mechanical wok, and we think that we’ll be able to redeploy staff away from cooklines into doing other things.”