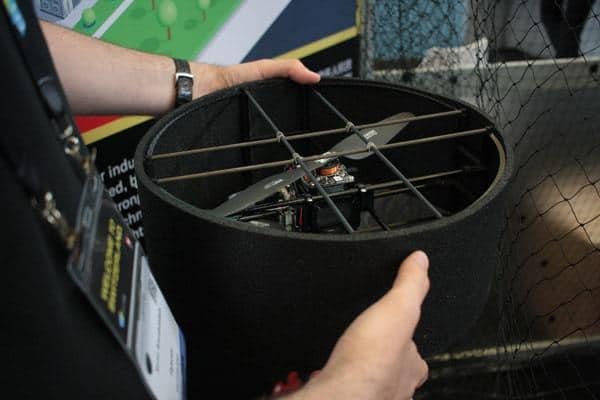 Switzerland’s EPFL Innovation Park start-up, Flybotix, is showcasing its dual-propeller drone today, online, at Xponential, the world’s largest tradeshow for unmanned and autonomous systems, reports a company press release. Intended for inspecting hazardous locations, this flat-engined aircraft is “quiet, saves flight time, and is also capable of flipping like a turtle if it finds itself upside down on the ground.”

The craft’s propellers were developed through a joint effort between Flybotix and another company at EPFL, Maxon. This new drone is expected to come to market during 2021. An initial prototype was unveiled in the summer of last year.

Currently, drones that are small enough to maneuver in tight spaces like ducts can stay airborne only for around ten minutes. To save energy and extend flight time, Flybotix’s drone has been fitted with a propulsion system that is similar to the one used on helicopters, which have unparalleled aerodynamic performance. Because the heavy mechanical stabilisation system is replaced with algorithms, the flight time is twice as long.

Engineers had to redesign the motor’s shape in order to superimpose the twin propellers and free up space for payloads. Olivier Chappuis, Head of Maxon’s innovation lab (Milab) at EPFL and Flybotix’s partner, explained,  “The stationary portion of the gear system has been inverted. This enabled us to flatten it, leaving more space between the propellers.”

He continued, “We gain a great deal from working with start-ups. They need new systems developed in record time, which spurs us to innovate more quickly. And our findings can be used in other applications too.”

The new drone “includes a number of other innovations, such as a patented cage system that allows it to navigate through obstacles and right itself when upside down. This system – inspired by turtles – triggers a pendulum movement; the inverted drone rocks back and forth for a few seconds until the swinging movement returns it to an upright position.”

Despite the pandemic, 2020 was a productive year for Flybotix given the firm raised CHF1.5 million in investments. The drone is now ready for commercial production and will be assembled in Switzerland.

EPFL’s Innovation Park is home to more than 200 start-ups as well as many branches of large companies, putting them in close proximity to EPFL’s fast-paced and flourishing innovation community.