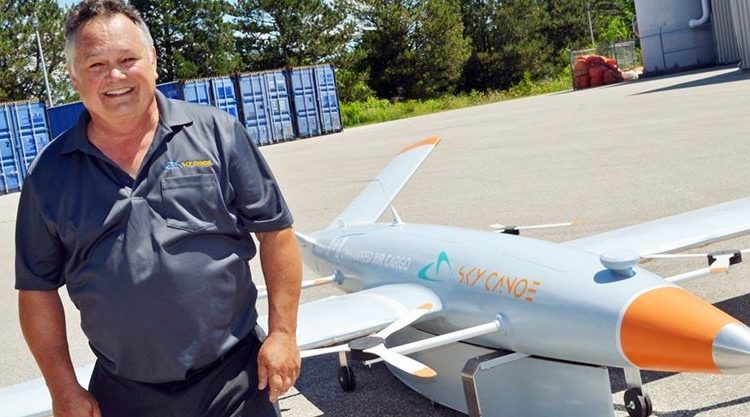 Dale George, a retired pilot who lives in Tiny Township (population 11,800) in Simcoe County, south-central Ontario, has helped develop the Sky Canoe, an autonomous drone that can transport up to 100 kilograms of cargo per trip. “It is not that little multi-rotor drone that lands out on your front lawn and scares the dog,” George says. “It’s a real aircraft –  not a toy!”

The Sky Canoe gained its name from the canoe-shaped compartment that sits underneath the body of the drone. George believes his craft will quickly become an alternative to using a courier service. Companies that have a few items they need to transport from one place to another can ship them quickly using his creation.

With decades of experience in the aviation industry, George knows about flying. When he retired, he moved from Kitchener to Tiny Township and instead of settling into retirement, George decided to help build and develop a state-of-the-art cargo drone.

“I thought, ‘I’ve built my own airplanes. Why not build one I don’t have to sit in?’ ” he quips. The design takes off vertically, rising like a helicopter, before flying off like an airplane. “It is secure and very safe and flies from terminal to terminal.”

The Sky Canoe is still in its development stages, with fellow engineers fine-tuning certain aspects of its design. Advanced testing will begin later this year. George believes he has created an aircraft that’s able to stand up in all weather  and is determined to prove it. “This is not one of those pie-in-the-sky projects. We are serious,” George affirms.

While the product is not market-ready yet, the Sky Canoe is already seeing significant interest from “some of the largest courier and logistics companies in the world.”

The plan is to open a manufacturing facility in the Midland area and mass-produce Sky Canoes. George says he loves the region and wants to give back by creating some high-paying jobs. “I am not taking this outside of the area. There will always be some contingent of the project here.”