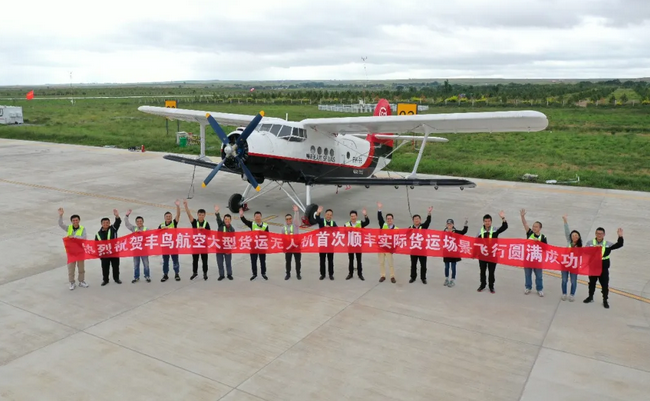 Last week the bi-plane UAV took off from an airport in the northwest Ningxia Hui region, which produces various perishable foodstuffs, and landed at an airport in inner Mongolia after a flight time of around an hour.

Xinhua News reported that the FH-98 has a maximum take-off weight of 5.25 tonnes and been designed to carry payloads of up to 1.5 tonnes, with a cabin space of 15 cubic metres. FH-98 has been jointly developed by SF Express and China Aerospace Times Electronics, and is based on the China-developed Y-5B freighter, which itself is forged on the An-2.

The report explained the model is capable of short take-offs and landing with a cruising speed of 180 kph, and is suitable to serve a wide region including nearby cities. The craft is expected to greatly enhance the efficiency of regional logistics. The company said this was the first time a large UAV had been used in a Chinese logistics project. SF Express commented the drone can greatly reduce operating costs and eventually compete with trucks.

In 2017, the company set up a subsidiary, Fonair, to handle the business-side of the UAV. To date, Fonair has been given permission to use nine air routes to conduct trial flights. In the future, the deployment of drones to carry cargo to rural and remote communities as well as islands where ferry services are infrequent, may rapidly grow.