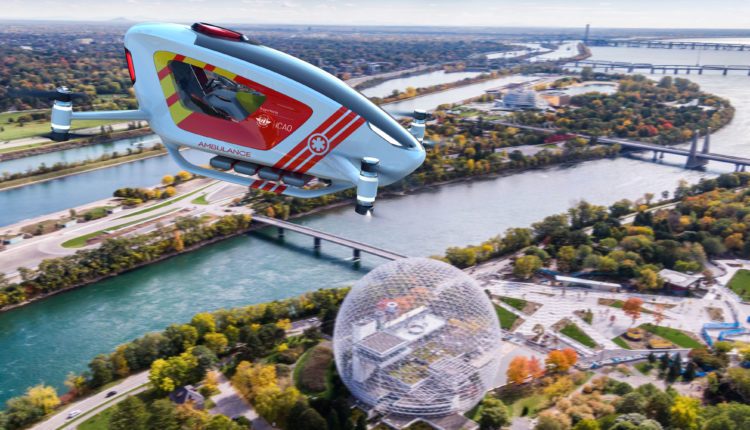 In late 2017, the International Civil Aviation Organisation (ICAO) began working on the future of aviation. One of their visionaries was Charles Bombardier, an internationally recognized futurist who produced hundreds of designs through Imaginactive, a think-tank focused on envisioning what future aircraft might look like.

According to unitingaviation.com, one of the key concepts envisioned by Bombardier and ICAO staff was unveiled during a ceremony at ICAO HQ in 2018. Called the Ambular, it is an eVTOL created to rapidly fly a person facing a medical emergency to hospital.

The team behind the Ambular team wanted to unleash the humanitarian potential of eVTOLs by improving peoples’ quality of life. The team later developed a 2nd version of the Ambular in the spring of 2019. The next step was to build various small-scale prototypes, as well as one full-scale non-flying mock-up.  After collaborating with the Concordia Institute of Aerospace Design & Innovation (CIADI), this mock-up was revealed in December.

It is hoped Aerospace Day 2020 will go ahead later this year, a Conference hosted by CIADI with the theme: The Future of Air and Space Mobility as the Ambular mock-up will be exhibited and several key players from the aerospace industry as well as the emergency response will be present. Meanwhile, the Ambular team is currently looking for sponsors interested in contributing to the project’s development.