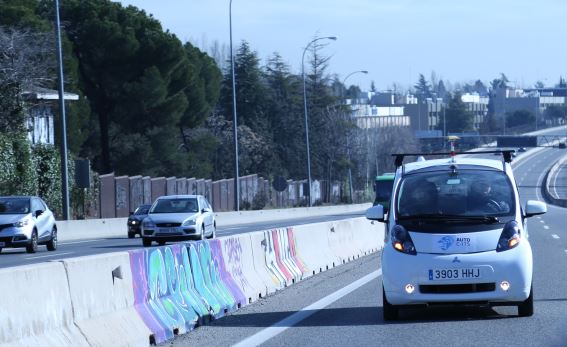 Indra reports it has proven that intelligent transport services based on cooperative systems (C-ITS), which allow vehicles to “talk” with each other and with traffic infrastructure, improve the road safety, the management capacities of operators, and the safety and capacities of autonomous vehicles.

According to a company press release: “This can be seen in the results and recommendations that the company presented at the closing event of the European R&D&I project AUTOCITS led by Indra, which tested autonomous driving on Lisbon, Madrid and Paris roads. The goal: to contribute to adapting regulations, traffic control centers and infrastructures to facilitate the circulation of autonomous vehicles in urban nodes through the development of C-ITS services.

“The event, which took place at the headquarters of the Directorate-General of Traffic, was inaugurated by the Deputy Director General of the DGT, Jorge Ordás, with the presence of other directors of the DGT, which is part of the consortium, the Ministry of Public Works and the European Commission, as well as several project partners: Universidad Politécnica de Madrid (UPM), Instituto Pedro Nunes (IPN), Inventeurs du Monde Numérique (INRIA) and Indra itself. The Portuguese National Road Safety Authority (ANSR) and the University of Coimbra (UC) complete the project consortium, which has received funding from the European CEF (Connecting Europe Facility) program.

“The C-ITS services developed in AUTOCITS allow communication and secure exchange of data between vehicles, users and infrastructure, using the European communications standard ITS-G5. In this way, they offer valuable information to managers, users and connected and autonomous vehicles, thus expanding their “vision” and facilitating decision-making through notifications in real time about road works, traffic jam situations or adverse weather conditions, among many other examples.

“During the event, attendees were able to see on the videowall of the DGT headquarters in Madrid live images from the traffic cameras of the A-6 BUS-VAO featuring one of the autonomous vehicles used in the project. This vehicle managed to reduce its speed and changed lanes following the notifications sent to it from the control center, as well as the information of its own on-board systems (ADAS).

“The AUTOCITS project has contributed to the development and validation of the architecture, communications and cooperative intelligent services, it has deployed them in three metropolitan pilot projects, and has validated the guidelines that the C-ROADS platform is giving to all European projects in this field. In addition, not only have these standards been adopted, but AUTOCITS has also collaborated with this platform, offering information on the tests and their results.

“The 14 autonomous and connected vehicles used in the three pilot projects have traveled more than 6,000 km during the tests, communicating with control centers and traffic infrastructures through 22 road units from four different suppliers. Its interoperability has also been tested with transnational tests, where the systems and services developed in the pilot project for one city were tested in other capitals in order to verify their proper functioning.

“In this way, the pilot projects in Lisbon, Madrid and Paris will facilitate the large-scale deployment of these smart services throughout Europe, and contribute to the development of the Atlantic Corridor, one of the priority routes for the development of the European transport infrastructure. In addition to designing, testing and contributing to the standardization of C-ITS services and facilitating their extension, the AUTOCITS project has analyzed the regulation for autonomous driving at a European and international level to favor their harmonization, and has laid the foundations for the development of a future legislation on autonomous driving in Portugal, where the first tests of autonomous cars took place.

“More than 50 stakeholders were involved in the project, which also collaborated with other initiatives in the field of connectivity and autonomous driving, including the C-ROADS project, among others.”