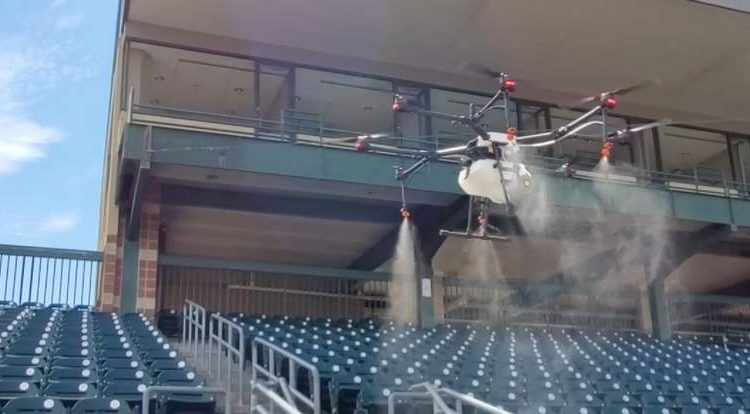 An Iowa City company that uses drones to spray crops is offering the same technology to sanitize open areas and seating in stadiums and other sports facilities, according to thegazette.com.

Rantizo, launched in 2018, is the first company licensed and approved for drone-based agricultural spraying in multiple US states. The company plans to roll out its stadium spraying services nationwide over the next week.

“We had a large professional sports organization reach out to us a few weeks back looking to use our drone sprayers as a way to sanitize their stadium,” said David Pieper, Rantizo director of sales. “From there, we reached out to a few local organisations that confirmed a need and interest.” Pieper continued, “We completed some initial autonomous testing with them just last week and it went very well.”

Peiper said the Iowa Cubs worked with Rantizo to test its drone spraying technology at Principal Park in Des Moines, where the minor league club plays its home games.

Sports organisations or open areas needing to be sanitized will be charged an initial setup fee, as well as a per-unit price determined by area or number of seats. After a location is mapped, repeated applications can be made between events.

“To sanitize stadiums at this magnitude, traditionally would require dozens of workers and hours of time,” Michael Ott, president and CEO of Rantizo, explained. “That simply isn’t practical right now. With our drone sprayers, we can get into the stadiums, spray the seats quickly, efficiently and accurately, with minimal exposure or need for human effort. Once we map out the stadium, it’s really easy to repeat.”