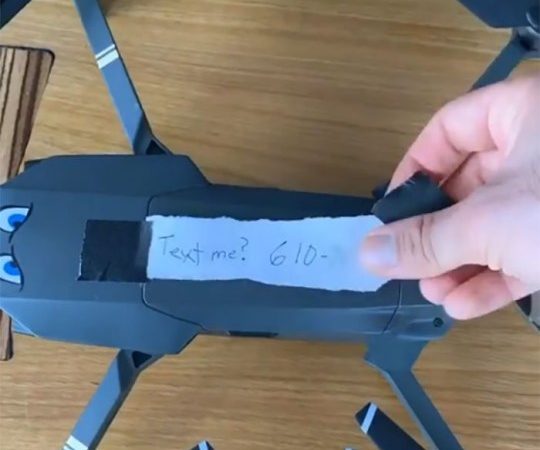 The metro.co.uk reports that a New York-based photographer, Jeremy Cohen, won over his neighbour, Tori, after seeing her dancing on an adjacent apartment rooftop during the city’s lockdown. So smitten was he, that Jeremy sent his drone flying across the sky with his mobile number stuck to the craft.

Tori, 24, then texted him back and soon they were having their socially distanced date, while ‘FaceTiming’, as Jeremy arranged for Tori’s roommate to set up a dinner table complete with flowers, so they could share a romantic dinner together rooftops apart.

Then, he took the next step by actually asking Tori on a real-life date. But, he didn’t want to risk anything so, naturally, decided to inflate a zorbing bubble and got inside it. The hilarious antics were caught on camera for Jeremy’s ‘TikTok’ channel where the video quickly went viral. (see below)

He explains: “I was working on a photo series from my apartment where I’ve been documenting the roof culture during quarantine – so I’ve been looking out my windows a lot. That’s when I noticed Tori dancing.

“We waved ‘Hi’ at each other and I felt a bit of a connection so I wanted to get in touch. Fortunately, I possessed a drone.” He continued: “I was a little nervous, but was craving human interaction after being cooped up in my apartment for awhile.

“Thanks to my drone, our first date went amazing – we get along well and she’s easy to talk to.” Adding:  “We just went on our second date and hope to go on more in the future.“